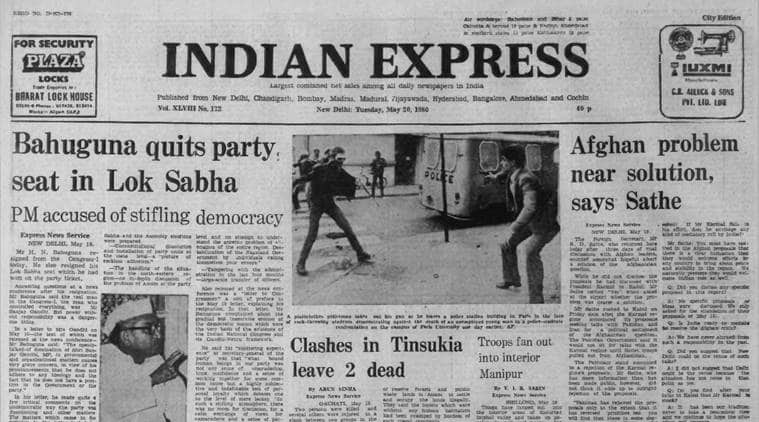 Foreign secretary, R D Sathe, who returned to Delhi after three days of vital discussions with Afghan leaders, sounded somewhat hopeful about a solution of  the controversial Afghanistan question.

H N Bahuguna has resigned from Congress-I. He also resigned his Lok Sabha seat which he had won on the party ticket. Answering questions at a news conference after his resignation, Bahuguna said the real man in control of Congress-I was Sanjay Gandhi. In a letter to Mrs Gandhi on May 10 — the text of which was released at the news conference — Bahuguna said: “The openly talked-of domination of Shri Sanjay Gandhi, MP, in governmental and organisational matters causes very grave concern in view of his pronouncements, that he does not adhere to any ideology and the fact that he does not have a position in the government or the party.”

Foreign secretary, R D Sathe, who returned to Delhi after three days of vital discussions with Afghan leaders, sounded somewhat hopeful about a solution of  the controversial Afghanistan question. While he did not disclose the details of  the proposals he had discussed with President Babrak Karmal in Kabul, Sathe replied, “Yes” when asked at the airport whether the problem was nearer a solution. Sathe rushed to Kabul on Friday soon after the Karmal regime announced its proposals seeking talks with Pakistan and Iran for a political settlement of the Afghanistan question.

Though there is great resentment in Congress-I circles over the allotment of tickets for the assembly elections in Rajasthan, the party still has a definite edge over the splinter groups of the Opposition. Despite infighting, it may bag between 110 and 120 of the 200 seats. Whatever the final outcome, there is nothing to indicate that the Opposition also has a chance to form a government after the election. Ram Kishore Vyas, state Congress (I) chief — tipped for the chief ministership — originally put the figure at 130 seats. Asked again at a recent news conference, Vyas did not repeat the figure but only said that the party would form the government in the state.