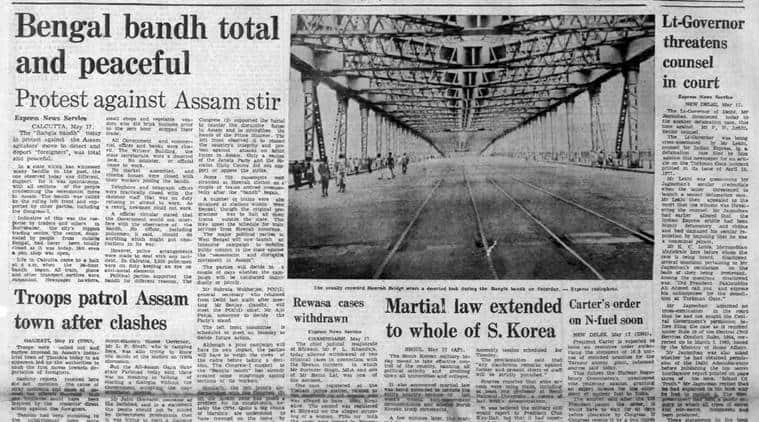 The South Korean military moved to take control of the country, banning all political activity and shutting down universities, and colleges.

The “Bangla bandh” in protest against the Assam agitators’ move to detect and deport “foreigners”, was total and peaceful. In a state which has witnessed many bandhs in the past, this one was different. Support for it was spontaneous, with all sections of the people condemning the secessionist move in Assam. The bandh was called by the ruling Left Front and supported by other parties, including the Congress-I. Indicative of this was the response by traders and others in Burrabazar, the city’s biggest trading centre. The centre, dominated by people from outside Bengal, had never been totally closed as it was today. Not even a pan shop was open.

The South Korean military moved to take control of the country, banning all political activity and shutting down universities, and colleges. Further, it announced that martial law was being extended to include the entire country because of last week’s violent anti-government demonstrations and alleged North Korean troop movements. Few minutes later, the martial law command issued its first proclamation, closing schools and banning all political gatherings, apparently including the National Assembly session scheduled for Tuesday. The proclamation said that ‘‘any slanderous remarks against former and present chiefs of staff will be strictly punished.”

“Singhs need no tickets,” said Puran Singh, 42, a Nihang Sikh who, along with his three-year-old mare Soma Rani, was taken into custody at Delhi main railway station for ticketless travel, while talking to ENS. Singh is, according to railway employees, a record-breaker — having travelled with his horse inside a passenger compartment for the first time. Singh, armed with two curved swords and the traditional Nihang Barcha (spear), and accompanied by his mare, was on his way to pay homage at the Sis Ganj Gurudwara. He boarded the 54 DN Himachal Express at Fatehgarh Sahib, pear Nangal on Sunday. He belongs to a village nearby.