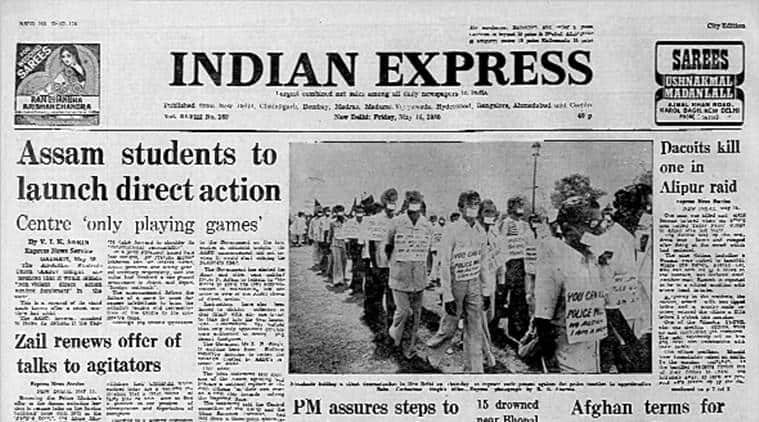 The All-Assam Students Union (AASU) announced that it would launch “non-violent direct action against foreigners” in the state — a reversal of its stand made known after a secret conclave last night. The AASU, however, promised to review its decision if the Centre came forward to shoulder its “constitutional responsibility”. In a joint statement issued in Gauhati, Prafulla Kumar Mahanta and Bharat Narah, AASU president and acting general secretary respectively, said the union had finalised a two-phased programme to detect and deport “foreign nationals”. The announcement follows the failure of a move by some Assamese intellectuals to bring the agitation leaders and Centre representatives to the conference table.

Western diplomatic circles have exhibited keen interest in Kabul’s plans for political settlement in Afghanistan, even though a British foreign office spokesman has said there is nothing new in them. Rejecting the plan, the spokesman said the proposals showed little or no change from the previous Soviet and Afghan positions. If the proposals were accepted, it would result in confirmation of status quo since the Kabul regime would obtain Pakistani-Iranian recognition and secure frontiers with those countries before the Soviet Union gave any undertaking to withdraw.

Prices of several essential commodities continue to rise, according to latest official statistics. The wholesale price index for all commodities rose by 0.6 per cent during the week ending May 3. Soaring prices of food articles and manufactured food products have contributed to the increase in the wholesale price index. The rise in the prices of khandsari, sugar, edible oils and salt during the week ranged between one and 10 per cent. Among the primary food articles, dals, fruits and vegetables, wheat, barley, and fish rose by one to five per cent during this period.