Forty years ago may 16 1979 assuring the police 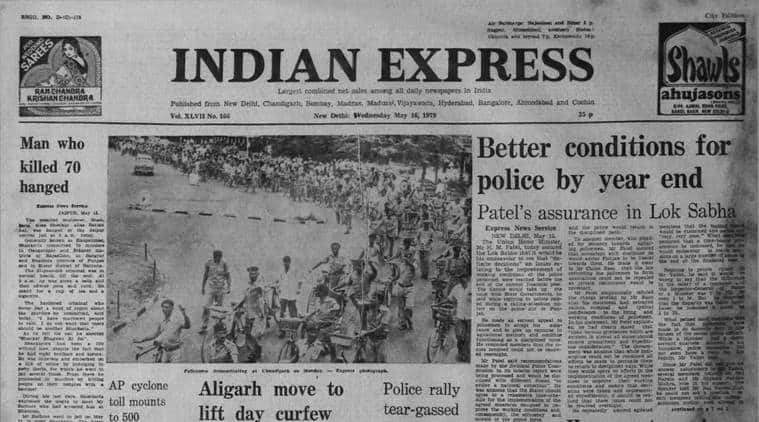 Union home minister H M Patel assured the Lok Sabha that it would be his endeavour to see that “definite decisions” on issues relating to the improvement of working conditions of the police personnel were reached before the end of the current financial year. The Centre would take up the issue with the state governments, he said, while replying to points raised during a calling-attention notice on the police stir in Punjab. He appealed to policemen to give up recourse to agitational methods and continue functioning as a disciplined force. Patel said recommendations made by the National Police Commission in its interim report were being processed and would be discussed with different States “to evolve a national consensus”.

The Punjab policemen’s stir, which entered its eighth day, as reports of demonstrations poured in from a number of places. While there was no addition to yesterday’s figure of 125 of those summarily dismissed, the number of arrested policemen went up to 320. Yesterday’s government’s decision to increase their salary and allowances intended to indicate its commitment to the welfare of the employees, has apparently had no effect, if reports of demonstrations from Amritsar, Patiala, Hoshiarpur, Ropar and other places are any pointer. Claiming a steady improvement in the situation, the home secretary, R C Kapila, told a news conference that only at some places the BSF was doing police duties, and, reiterated that its deployment was decided upon by the local authorities.

The Aligarh district authorities are considering lifting day curfew permanently “if the situation continues to be normal”. Curfew was relaxed for seven hours from 9 am today in the entire city and Civil Lines area, and the day passed off peacefully, the district magistrate, V K Dewan said. Dewan said the curfew was relaxed in the Aligarh Muslim University area for the first time since Thursday night’s disturbances. There was however no relaxation in the Shamshad Market area.