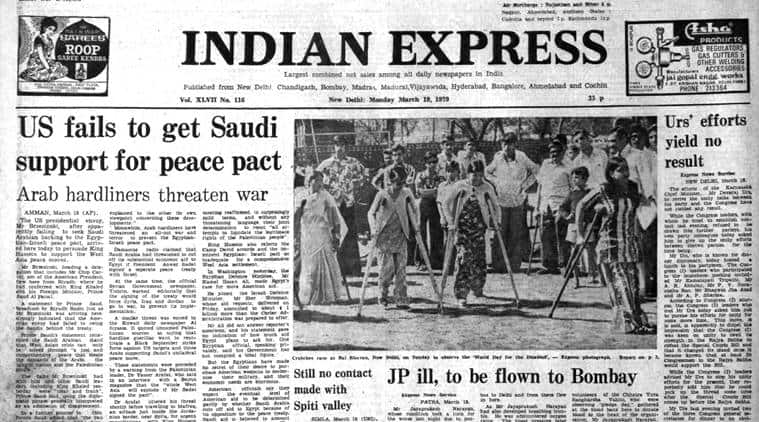 The US presidential envoy, Brzezinski, after apparently failing to seek Saudi Arabian backing to the Egyptian-Israeli peace pact, arrived here in Amman today to persuade King Hussein to support the West Asia peace moves. Brzezinski, heading a delegation that includes Chip Carter, son of the American President, flew here from Riyadh, where he had conferred with King Khaled and his foreign minister, Prince Saud AI Faisal. A statement by Prince Saud, broadcast by Riyadh Radio just as Brzezinski was arriving here, strongly indicated that the American envoy had failed to swing the Saudis behind the treaty.

India’s No To Nuclear

Prime Minister Morarji Desai reiterated that India would not manufacture nuclear weapons. “We shall not use nuclear weapons and we will not make them,” Desai told a seminar on ‘Gandhi and the contemporary world’, at the Jawaharlal Nehru University in Delhi. How can we tell others not to manufacture nuclear weapons if we ourselves have them?” Desai asked. He said Gandhi’s relevance lay in the fact that he had, long ago, foreseen that mankind was heading towards doom by harnessing science and technology for destructive purposes. He wanted science to be used for the good of the world so that man became happier, not fearful.

Prime Minister Morarji Desai has appealed to the business and industrial houses and the people in general, to contribute generously to the National Children’s Fund, and thus, “for the welfare of the future of mankind.” In a nationwide appeal, he stated that it was the responsibility of the community to see that their children, received full facilities required for their growth and development. The Prime Minister stressed the role of voluntary organisations in the development of children “who require to be brought up with care and affection which only dedicated individuals in voluntary organisations can provide.”