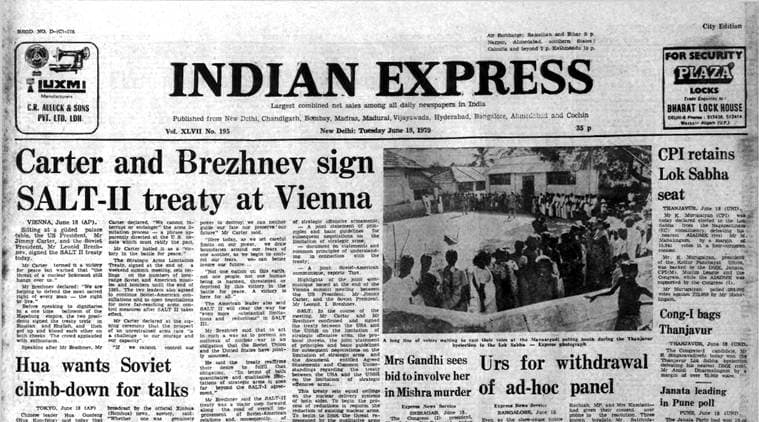 Chinese leader Hua Guofeng (Hua Kuo-feng) said that prospects for negotiations with the Soviet Union on improving relations depend on whether the Soviet government makes a substantive change in its position. Hua told the National People’s Congress that the Soviet government had agreed to hold negotiations, but asked: “Did this change the essence of the matter”. China has accused the Soviet Union repeatedly of wanting to subjugate China and using Vietnam to set up a Soviet outpost in South-East Asia.

Sitting at a gilded palace table, the US president, Jimmy Carter, and the Soviet president, Leonid Brezhnev, signed the SALT II treaty. Carter termed it a victory for peace but warned that “the threat of a nuclear holocaust still hangs over us.” Brezhnev declared: “We are helping to defend the most sacred right of every man — the right to live.” Earlier, the two presidents signed the treaty texts in Russian and English, and then got up and kissed each other on both cheeks. The crowd applauded with enthusiasm.

The minister for Commerce and Civil Supplies, Mohan Dharia, said that the government would import the essential commodities included for the public distribution scheme, wherever necessary, to ensure its smooth functioning. Under the scheme, to be launched from July 1, 13 items have been selected for distribution including wheat, wheat products, rice, coarse grains, processed oils, kerosene, controlled cloth, common varieties of cheap cloth, matches, toilet soaps and washing soaps, exercise books, tea and coffee. Dharia said that the real emphasis of the scheme should be viewed from the fact that it would be a production-cum-distribution scheme. Production of all the items to be distributed would be ensured before their distribution is undertaken by public distribution outlets.