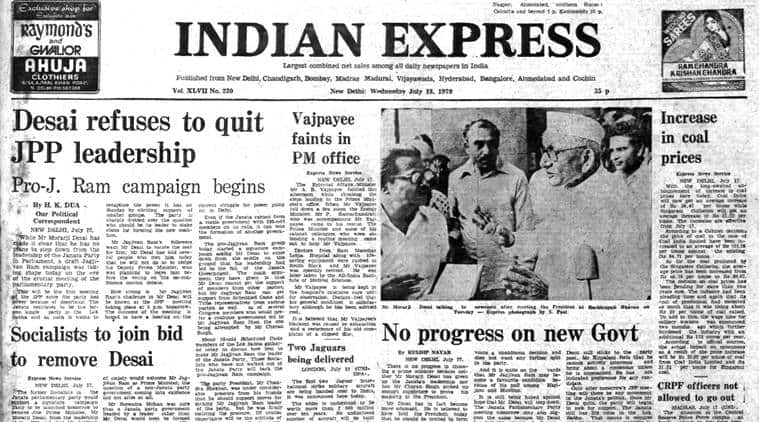 While Morarji Desai has made it clear that he has no plans to step down from the leadership of the Janata Party in Parliament, a draft Jagjivan Ram campaign was taking shape on the eve of the crucial meeting of the parliamentary party.

This will be the first meeting of the Janata Parliamentary Party since the party lost power because of desertions. The Janata continues to be the largest single party in the Lok Sabha and as such it wants to recapture the power it lost on Sunday by eliciting the support of smaller groups. The party is sharply divided over the question who should be its leader to stake claim for forming the new government.

The former Socialists in the Janata Parliamentary Party would support a signature campaign likely to be launched to remove Prime Minister Morarji Desai from the leadership of the JPP and elect Jagjivan Ram in his place. In the view of the Socialists, the election of Jagjivan Ram as the new leader of the JPP was the only way of saving the party from disintegrating.

It would also enable the party to make the claim to forming a new government because the party would still be the single-largest group in Parliament. The group of Socialists led by George Fernandes has changed their stand that they would not support any government supported by former members of the Jan Sangh or Congress-I.

It looks like the Congress is not going to join any coalition government. But it may support such a government from outside if the party feels that the new government’s policies conform to its ideals and stands. This is the picture which emerged from recent developments.

Swaran Singh, Congress president, and Y B Chavan, leader of the Congress Parliamentary Party, met about 60 Congress MPs to ascertain their views on the question. Most of them were opposed to the idea of the Congress joining any coalition.