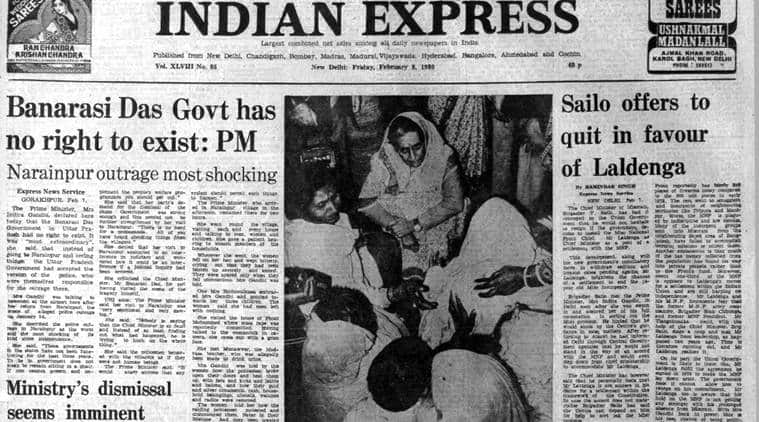 It was “most extraordinary”, she said, that instead of going to Narainpur and seeing things, the UP government had accepted the version of the police, who were themselves responsible for the outrage there.

Prime Minister Indira Gandhi declared in Gorakhpur that the Banarasi Das government in Uttar Pradesh had no right to exist. It was “most extraordinary”, she said, that instead of going to Narainpur and seeing things, the UP government had accepted the version of the police, who were themselves responsible for the outrage there. Indira Gandhi was talking to newsmen at the airport in Gorakhpur after her return from Narainpur, the scene of alleged police outrage on January 14. She said: “These governments in the states have not been functioning for the past three years. To be in government does not mean to remain sitting in a chair. ”

Mizoram chief minister Brigadier T Sailo has had it conveyed to the Union government that he would not hesitate to resign if the government decides to install the Mizo National Front chief, Laldenga, as chief minister as part of a settlement with the MNF. This development, along with the new government’s conciliatory move to withdraw sedition and treason cases pending against Laldenga brightens the chances of a settlement to end the 14-year old Mizo insurgency. Brigadier Sailo met Prime Minister Indira Gandhi in Delhi soon after she was sworn in and assured her of his full cooperation in sorting out the Mizo problem.

Speakers from opposition parties warned the people against the growing “authoritarian tendencies” of the Congress (I) government at the Centre and urged them to resolutely fight for democracy. Five opposition parties — Janata party, Congress, Lok Dal, the CPM and the Akali Dal — jointly organised a “protest procession” from India Gate to Boat Club where it terminated into a rally. The rally however could not attract much crowd. Scheduled speakers like Jagjivan Ram and Y B Chavan did not turn up.