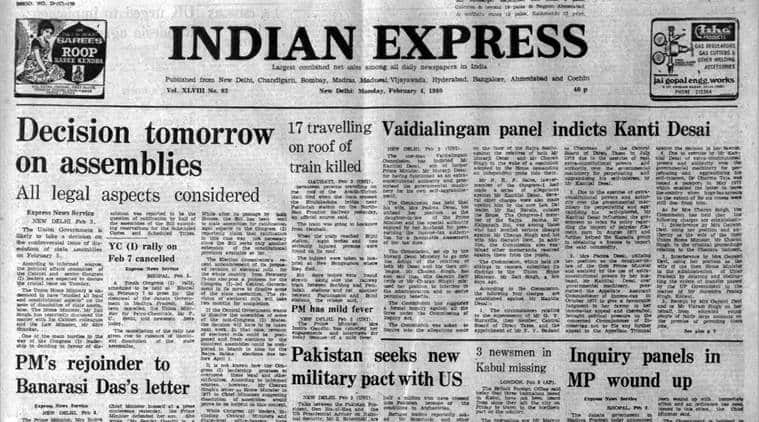 The Union government is likely to take a decision on the controversial issue of dissolution of state assemblies on February 5. According to informed sources, the political affairs committee of the cabinet and senior Congress (I) leaders are expected to discuss the crucial issue on Tuesday.

The Union home ministry is understood to have “studied all legal and constitutional aspects” on the issue of dissolution of state assemblies. Home Minister Zail Singh has reportedly discussed the matter with his cabinet colleagues.

Talks between Pakistan President General Zia-ul-Haq, and the US presidential adviser on national security, Z Brzezinski, are reported to have run into difficulties on the second day. According to BBC, the difficulty was said to be two-fold: One relating to the quantum of the military and economic aid, and the other about the defence agreement between the two countries. The US was reportedly willing to offer $400 million in military and economic aid over the next two years, but General Zia is said to be asking for a bigger aid packet.

The one-man Vaidialingam Commission has indicted Kantilal Desai, son of former Prime Minister Morarji Desai, for having functioned as an extra-constitutional authority and pressurised the governmental machinery for his own self-aggrandisement. The Commission has held that his wife, Padma Desai, also utilised her position as the daughter-in-law of the PM and the special authority enjoyed by her husband for pressurising the income tax authorities for a favourable assessment of her tax dues. The Commission, set up by the Desai ministry to probe the doings of the relatives of both Desai and his then colleague, Charan Singh, has also said that Gayatri Devi (wife of Charan Singh) misused her position to interfere in the administration and to derive pecuniary benefits.