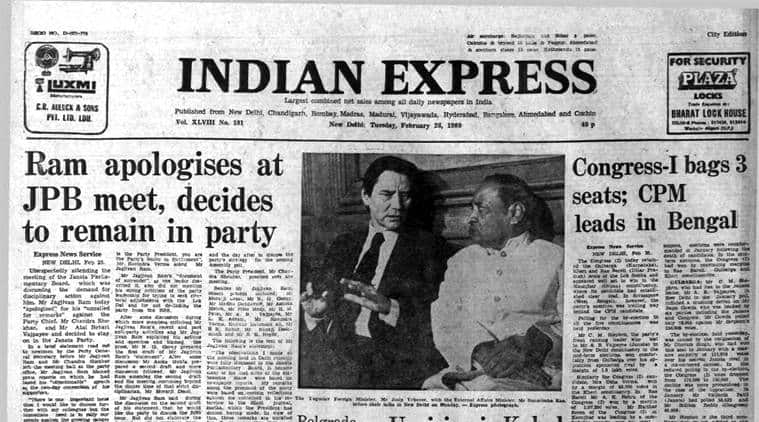 “The immediate need is to rally our people against the growing danger to democracy in India and mobilising support against the re-emergence of authoritarianism,” Ram said in a statement.

Unexpectedly attending the meeting of the Janata Parliamentary Board, which was discussing the demand for disciplinary action against him, Jagjivan Ram “apologised” for his “uncalled for remarks” against the party chief, Chandra Shekhar and Atal Bihari Vajpayee and decided to stay on in the Janata party. In a brief statement, Ram blamed press reports on which he had based his “objectionable” speech at the two-day convention of his supporters. “There is one important issue that I would like to discuss further with my colleagues but the immediate need is to rally our people against the growing danger to democracy in India and mobilising support against the re-emergence of authoritarianism,” Ram said in his statement.

The Centre may take a fresh initiative to end the deadlock in Assam on the issue of foreign nationals. The problem was examined by senior officials in the home ministry in the light of the discussions held at Gauhati and Shillong and the clear stand taken by the student leaders spearheading the five month-old movement against infiltration of foreigners. According to political circles, Indira Gandhi is likely to visit the state and resume discussions with the various groups. A delegation of the All Assam Students Union had met the PM early this month.

The Kabul uprising, blown out of proportion, was bound to be short-lived because there is no way for the insurgents to get outside help on a sustained basis. The city is surrounded by Soviet troops and the airport is under their control. Even inside the city, the barracks once occupied by the Afghan army, are under the control of the Russians. Kargah, a sort of cantonment, is only nine kilometres away from the centre of Kabul, and solid formations of Soviet troops are there with tanks, artillery, armoured cars and a variety of other equipment.

From the IE edition dated February 24

WhatsApp, Facebook integration in the works; here's our first look at it