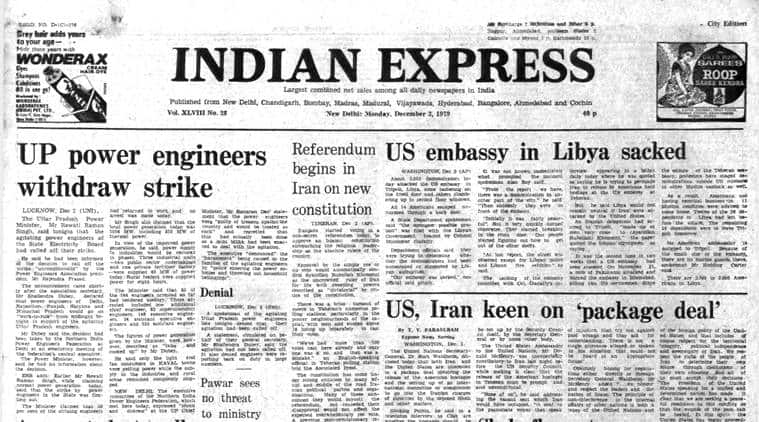 Uttar Pradesh power minister Rewati Raman Singh said that the agitating power engineers of the state electricity board had called off their strike. He said he had been informed of the decision by the Power Engineers Association president, Rejendra Prasad. The announcement came shortly after the association secretary, Shailendra Dubey, declared that the power engineers of Delhi, Rajasthan, Punjab, Haryana and Himachal Pradesh would go on “work-to-rule’’ in support of the agitating UP engineers.

Iranians started voting to a non-secret referendum to approve an Islamic constitution entrenching the religious leadership as the absolute rulers of the country. Approval by the simple “yes or no” vote would automatically confirm Ayatollah Ruhollah Khomeini as the uncrowned ruler of Iran for life with sweeping powers described as “dictatorial” by critics of the constitution. There was a brisk turnout of voters in Teheran’s numerous polling stations, particularly to the poorer neighbourhoods of the capital, with men and women above 16 lining up separately to cast votes. “We’ve had more than 700 votes cast here already and only one was a no. And that was a mistake,” an English-speaking official at the Teheran polling station told the Associated Press.

The students of Assam are on the war path and are determined to thwart elections in the state. The All Assam Students Union and the All Assam Gana Sangram Parishad have given a call for a 44-hour Assam bandh from 6 am on December 3 to 4 pm on December 4, to be followed by mass picketing from December 5 to 8 outside the state and central government offices. The main purpose of the agitation will be to thwart the move of candidates to filing their nomination papers. The essential services have been exempted from the purview of the bandh.

Ringing in the new

No explanation can satisfy CAA suit: Kerala Governor after meeting with chief secy

Bengal to take up resolution against CAA in House: Mamata Banerjee

BJP leader: Can't enforce CAA just because we have numbers