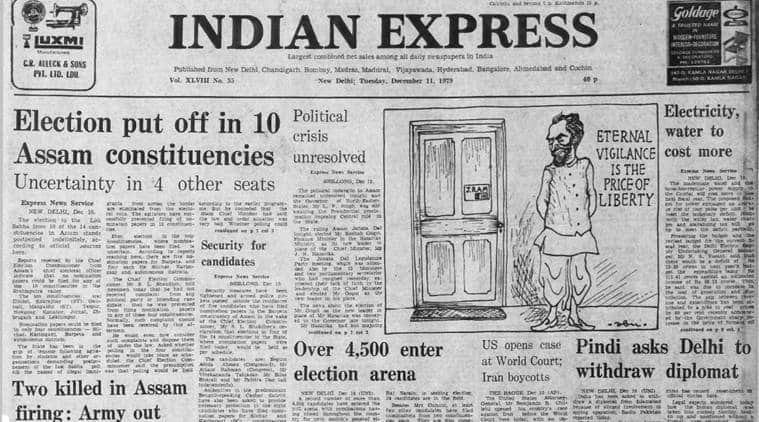 The election to the Lok Sabha from 10 of the 14 constituencies in Assam stands postponed indefinitely, according to official sources. Reports received by the chief election commissioner from Assam’s chief electoral officer indicate that no nomination papers could be filed for any of the 10 constituencies in the Brahmaputra valley. The state has been in the grip of tension following agitation by students and other organisations demanding postponement of the Lok Sabha poll till the names of illegal immigrants from across the border are eliminated from the electoral rolls. The agitators have successfully prevented filing of nomination papers in 10 constituencies.

The week-long 23rd general conference of the International Atomic Energy Agency (IAEA) concluded in Delhi without resolving some of the important issues raised by the third-world countries. The issues which have been shelved till the next general conference include the resolution of the “Group of 77” third-world countries submitted to the IAEA’s board of governors regarding the imbalances in the agency’s technical assistance programme vis-a-vis the safeguard implementation and their demand for proportionate representation on the board of governors.

The Group of 77 countries had also suggested in their resolution that, instead of being largely dependent on doles from rich countries, the technical assistance financing should be all from the IAEA’s regular budget like the provision made for safeguards implementation and which the agency will be spending about $19 million in 1980.

Mother Teresa of Calcutta’s Catholic Missionaries of Charity order received her $1,92,000 Nobel Peace Prize for 1979. She said she considered herself an unworthy winner, but accepted the prize cheque, the Nobel gold medal and diploma on behalf of the world’s poorest of the poor. The 69-year-old nun is the first Indian citizen and first Yugoslavia-born peace prize laureate, accepted the prize from the committee Chairman.