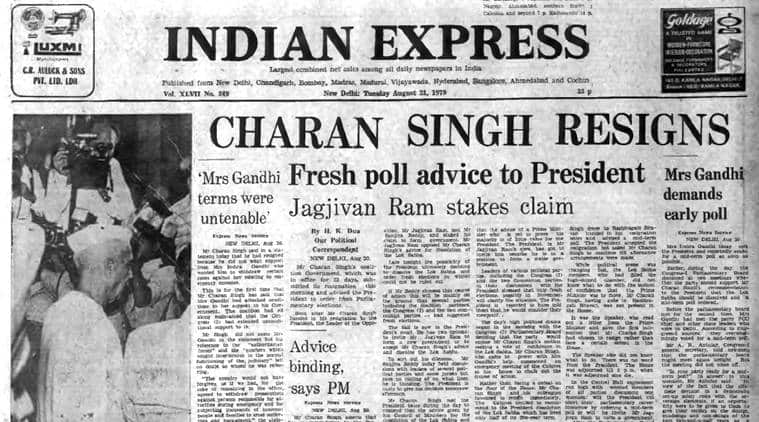 Charan Singh’s coalition government, which was in office for 23 days, submitted its resignation this morning and advised the President to order fresh parliamentary elections. Soon after, Singh handed in his resignation to the President, the Leader of the Opposition Jagjivan Ram, met Sanjiva Reddy, and staked his claim to form the government. Ram opposed Singh’s advice for dissolution of the Lok Sabha. The possibility of the president ultimately deciding to dissolve the Lok Sabha and order fresh elections in winter could not be ruled out.

Charan Singh said in a statement that he had resigned as the prime minister of the coalition government because he did not want support from Indira Gandhi who wanted him to withdraw certain cases against her relating to excesses during the Emergency. This is for the first time that Singh has said that Mrs Gandhi had attached conditions to her support to his government. Singh did not name Mrs Gandhi in the statement but his reference to the “authoritarian forces” and the “quarters which sought interference in the normal functioning of the judiciary” left no doubt as to whom he was referring. “The country would not have forgiven us if we had, for the sake of remaining in office, agreed to withdraw prosecutions against persons responsible for atrocities during Emergency,” the statement read.

Indira Gandhi met the President and reportedly asked for a mid-term poll as soon as possible. Earlier, during the day, the Congress-I Parliamentary Board discussed at two meetings whether the party should support Charan Singh’s recommendation to the president that the Lok Sabha should be dissolved and a mid-term poll ordered. Before the Parliamentary Board met for the second time, Mrs Gandhi had met the party PCC chief and other state leaders who were in Delhi. According to Congress- I sources, they overwhelmingly voted for a mid-term poll. A R Antulay, Congress-I general secretary, told newsmen that the parliamentary board might meet again tonight, but the meeting did not come off.