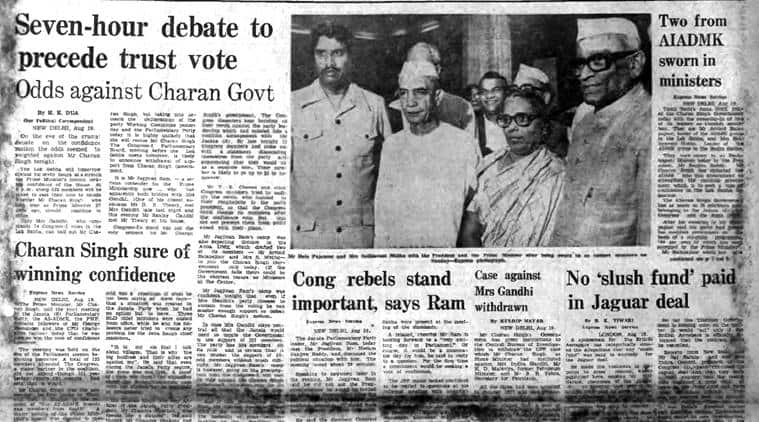 On the eve of the crucial debate on the confidence motion the odds seemed to be weighted against Charan Singh tonight. The Lok Sabha will tomorrow discuss for seven hours at a stretch the Prime Minister’s motion seeking confidence of the House. At 6 pm sharp, 533 members will be asked to cast their vote to decide whether Charan Singh can continue in office. Only Indira Gandhi, who commands 74 Congress-I votes in the Lok Sabha can bail out Charan Singh, but taking into account the Party Working Committee yesterday and the Parliamentary Party today, it is highly unlikely that she will rescue Charan Singh.

All the five Punjab Janata ministers submitted their resignations from the state cabinet following the Akali Dal’s decision to support Charan Singh on the vote of confidence in the Lok Sabha. The Akali Dal had taken the decision last night to support tbe Charan Singh Ministry without joining it. The Punjab Janata Party ministers, the deputy speaker of the state vidhan sabha and about half a dozen Janata legislators had come to Delhi to watch the Akali Dal’s decision unfold. The resignations of the Janata ministers were handed over to the chief minister, Parkash Singh Badal, by the state Janata president, Yagya Dutt Sharma this afternoon.

The Indian Air Force helicopter hovers over Morvi, then dips suddenly, like a roller coaster hurtling down at a sharp angle, according to a first-person account by Saeed Naqvi. From the air, Morvi looks like a still from an old war movie — devastated and desolate. There are rows upon rows of houses without roofs. What were once streets are now covered with heaps of rubble. A sample of the tragedy is available even in Rajkot, in the 10 odd refugee camps, in the voiceless wailing of women sitting huddled in a comer — they have lost all the members of their family. But the real tragedy is in the expressionless eyes of the people.