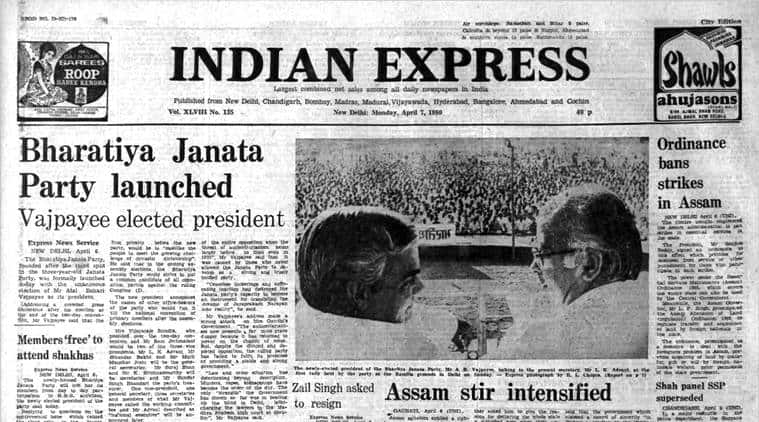 The Bharatiya Janata Party, founded after the third split in the three-year-old Janata Party, was formally launched with the unanimous election of Atal Behari Vajpayee as its president. Addressing a crowded press conference after his election at the end of the two-day convention, Vajpayee said that the first priority before the new party, would be to “mobilise the people to meet the growing challenge of dynastic dictatorship”. He said that in the coming assembly elections, the BJP would strive to put a common candidate of all opposition parties against the ruling Congress (I). The new president announced the names of other office-bearers of the party who would run it till the national convention or primary members after the assembly elections. Vijayaraje Scindia, who presided over the two-day convention and Ram Jethmalani would be two of the three vice-presidents, L K Advani, Sikandar Bakht and Murli Manohar Joshi will be the general secretaries.

If the mood of the 4,000 odd delegates at the two-day convention called by L K Advani is any indication, the revival of the Jana Sangh after the assembly elections is a distinct possibility. An overwhelming number of delegates and workers of the erstwhile Jana Sangh were patently disappointed with the leadership’s decision to name the new party the Bhartiya Janata Party. Several delegates particularly from Maharashtra, Madhya Pradesh and Delhi, expressed their disappointment with the announced policies of carrying on the legacy of JP Narayan.