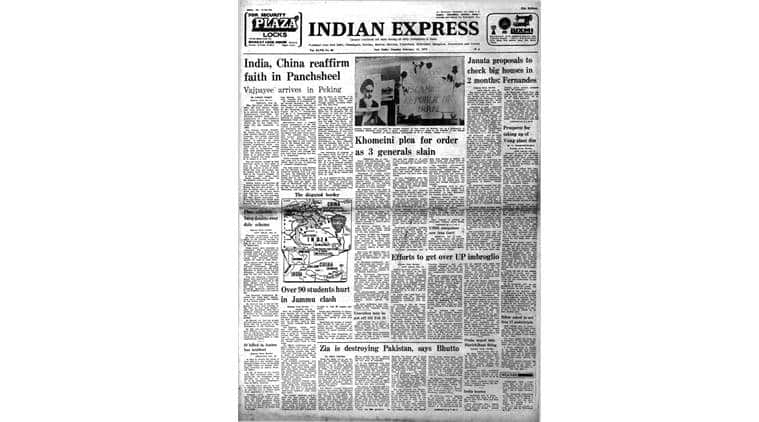 Iran’s new revolutionary government reported that resistance by Shah Mohammad Reza Pahlavi’s armed forces has ended, but it was having trouble controlling its own supporters. Thousands of armed youths roamed Teheran threatening symbols of the monarchy. Three generals were reportedly slain. Ayatollah Khomeini appealed to his followers for order. Khomeini’s 14-year fight to convert Iran to an Islamic republic succeeded after two days of bloody street fighting in Teheran.

Over 90 students and teachers were injured, 30 of them seriously, when police entered the Jammu University campus and two boys’ colleges and beat up all who came in their way. Thirty students have been arrested. The Kashmir armed police and CRP men entered the university campus at 11 am, chasing a group of stone-throwing youths, who had taken shelter near a college adjoining the old university campus, after about 200 teargas shells failed to calm them.

From his death cell in the district jail, Rawalpindi, Zulfikar Ali Bhutto has held out two olive branches, one to foreign powers, another to his political opponents at home. To foreign powers he says: “I am aware of the importance of global politics” and “I have vision enough to begin anew without any rancour for the past”. To his opponents at home he says the hour calls for “a comprehensive political settlement” and for “quiet and sincere negotiations between brothers”. But Bhutto remains implacable towards one enemy especially, General Zia-ul-Haq. He makes the angry demand that “the curse and stigma of martial law needs to be withdrawn without delay”. He exposes the misdeeds of martial law under Ayub, Yahya Khan and Zia, but against Zia he makes the very serious allegation that he is destroying the very basis of Pakistan.