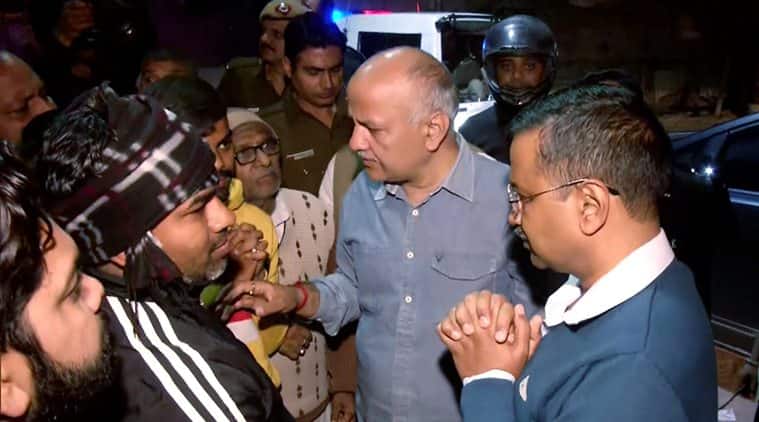 Delhi Chief Minister Arvind Kejriwal and Deputy CM Manish Sisodia interact with residents during his visit to the violence-hit area of Northeast Delhi, in New Delhi on Wednesday. (ANI)

Is this India’s version of coronavirus? The death toll is rising every day and no sign that people are being isolated to stop further spread. Watch out that it does not break out in Uttar Pradesh, Bihar next, then all over the Hindi belt.

The surprise is not that violence in Delhi broke out, but why it took so long. Why did it take the virus of communalism 70-plus days (since the day police rushed into Jamia Millia Islamia) to claim its first victims, and that too on a day Narendra Modi would have preferred to show Delhi at its best to his friend Donald Trump? The incubation of the communalism virus rarely takes so long. It is normally sudden, unexpected and murderous.

Recall 1984. It was not a Hindu-Muslim riot. It was a pogrom driven by Congress goons, erupting as news came that Indira Gandhi had been assassinated by her Sikh bodyguards. Police stood by. Sikhs died by the thousands, with no ability to retaliate. The then Home Minister became Prime Minister seven years later.

This time we have had peaceful protests by citizens across the country for more than two months without any instigation by opposition political parties. The protesters cite the Constitution and wave the Tricolour. The protest has been against a law — the Citizenship (Amendment) Act — not against any party or political leader. The protesters have been from all communities, but the central fear has been about likely loss of citizenship of Muslims.

This fear could have been, should have been, removed by Prime Minister Narendra Modi, if he had used his powers of communication to explain the contents of the CAA as well as the context in which it was going to be used. He could have explained that the National Register of Citizens (NRC) and National Population Register (NPR) are not new policies of his government but have been contemplated in the past. The CAA has been passed after discussions by both Houses of Parliament. The NRC had been carried out under the supervision of the Supreme Court for Assam. Even in Assam, the percentage of ‘doubtful’ cases — 1.9 million compared to 30 million ‘clean’ cases — amount to just 6%. Even these 6% have a right of appeal and redress. All this is in the public domain and could have been communicated to the protesting citizens.

This was not done. Even so, the protests stayed peaceful. The danger at that time was that police may fire upon the Shaheen Bagh protesters on some excuse. But that did not happen. Even the rhetoric labelling protesters as traitors who should be shot (by whom?) did not incite violence. What was it that, a fortnight after the Delhi election results, incited someone to spoil the Modi-Trump party in Delhi? Does it reflect the divisions within the Delhi BJP, between the hard and the soft factions?

The last major Hindu-Muslim riot was in Muzaffarnagar, UP, during the Samajwadi Party government, when the UPA-II was in power. All are in this together, the secular parties as well as the nationalists. All parties have to help to keep the virus from spreading across the country.

One thing is clear. Delhi cannot go on having a dual government. Make it a state so the Chief Minister can take charge of security. The Central government is too remote.