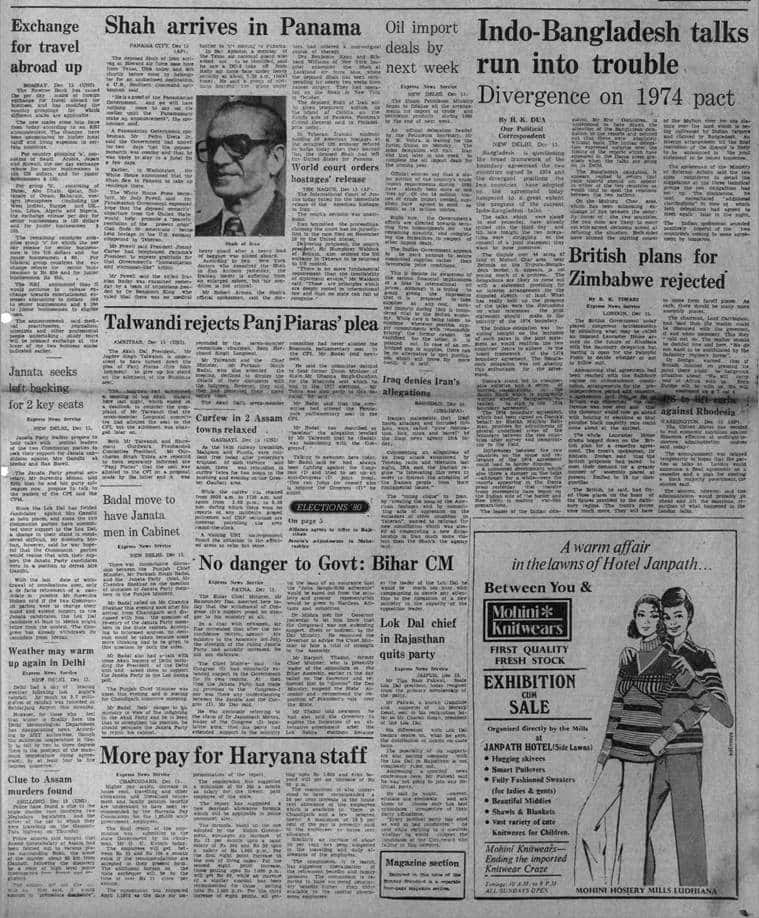 This is the front page of The Indian Express published on December 9, 1979.

Bangladesh is questioning the broad framework of the boundary agreement the two countries signed in 1974. The divergent positions the two countries have adopted on the agreement hampered to a great extent the progress of the current Indo-Bangladesh talks. The dispute over 44 acres of land in Muhuri Char area near Belonia on the Tripura-Bangladesh border, it appears, is not posing much of a problem. The delegations from the two countries are likely to come out with a statement providing for an interim arrangement for the disputed stretch of land.

The deposed Shah of Iran arrived at Howard Air Force base in Panama from Texas, US, and left shortly before noon by helicopter for an undisclosed destination, a US southern command spokesman said. “He is a guest of the Panamanian government, and we will have nothing more to say on the matter until the Panamanians make an announcement”, the spokesman said. A Panamanian government spokesman, Pedro Ureta Jr. said the government had known of the deposed monarch’s arrival for two days and that he was likely to stay in a hotel. Teheran has been demanding the extradition of Shah.

The Union petroleum ministry hopes to finalise the arrangements for import of crude and petroleum products during 1980 by the end of next week. An official delegation headed by the petroleum secretary, B B Vohra, is leaving for the Soviet Union. The same delegation will visit Iran and Iraq to complete the oil import deals for the coming year. Official sources say a major portion of the country’s crude import requirements during 1980 have already been more or less “tied up”. Of the 18 million tonnes of crude import needed, suppliers have agreed to send as much as 14 million tonnes.