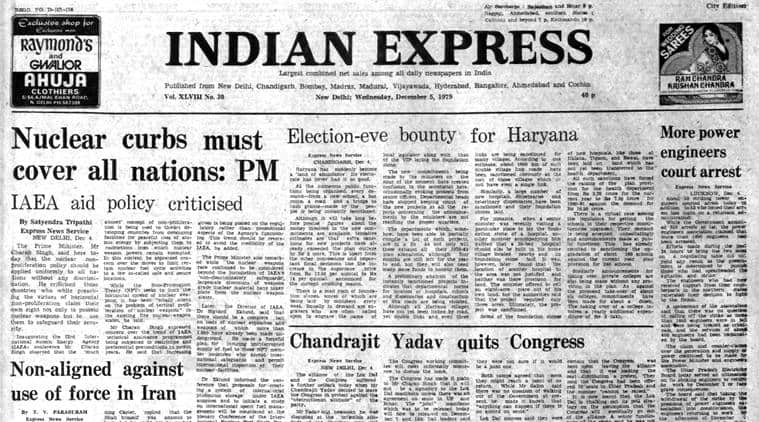 Prime Minister Charan Singh said in Delhi that the nuclear nonproliferation policy should be applied uniformly to all nations without any discrimination. He criticised countries who, while preaching the virtues of horizontal non-proliferation, claim their own right not only to possess nuclear weapons but to use them to safeguard their security.

A resolution drafted for the UN Security Council by the non-aligned members to cope with the Iranian crisis has hit a snag: Among other things, it underlines the need for non-use of force while the US is prepared to accept that only if it is coupled with wording that recognises the right of self-defence. This issue is crucial. The non-aligned resolution will not permit the use of force if any of the hostages are put up for trial. The American formulation will.

Prime Minister Charan Singh described as “a concoction” the reported statement of Amrit Nahata, producer of Kissa Kursi Ka film, before the Supreme Court. In a statement, Singh said: “My attention has been drawn to a petition filed by Mr Amrit Nahata in the SC in which he is reported to have averred that I had suggested to him (Mr Nahata) that he should take revenge on the former prime minister, Mrs Indira Gandhi, either by involving her or her son in the disappearance of the film Kissa Kursi Ka. If Mr Nahata was in desperate search of an excuse for joining Mrs Gandhi’s party, he should have discovered one which would not have exposed him as a self-condemned liar.”

The pace of filing of nominations for the Lok Sabha elections slackened after the first day’s rush. Tuesday is inauspicious in some parts of the country and this fact is believed to be responsible for the delay by major parties in finalising their candidates.