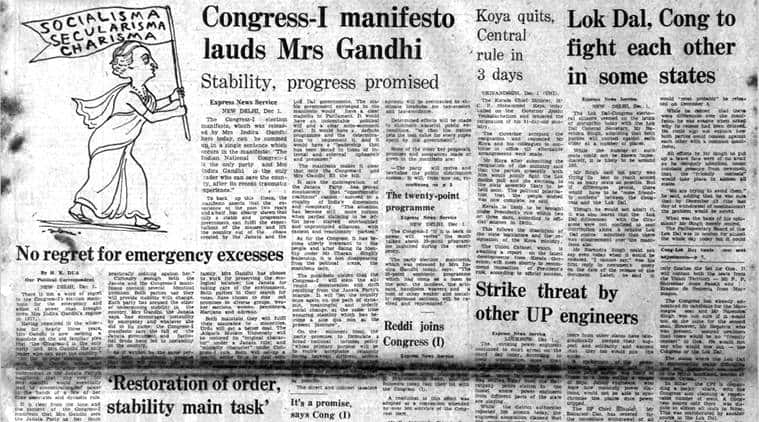 The Congress-I election manifesto, which was released by Indira Gandhi in New Delhi, can be summed up in a single sentence that occurs in the manifesto: “The Indian National Congress-I is the only party and Mrs Cndira Gandhi is the only leader who can save the country, after its recent traumatic experience.” To back up this thesis, the manifesto asserts that the experience of the last two-and-a-half years has clearly shown that only a stable and progressive government can fulfil the expectations of the masses and lift the country out of the chaos created by the Janata and the Lok Dal governments. The stable govemment envisaged in the manifesto would have a majority in Parliament. And it would have a “leadership that has been tested in times of internal and external upheavals and pressures”.

The Lok Dal-Congress electoral alliance seemed on the brink of disruption with Lok Dal General Secretary Narendra Singh admitting that both parties will contest against each other in a number of seats. Singh said his party was trying to reach an accord on as many seats as possible but if differences persist, there would have to be “some friendly contests”. Though he would not admit it, it was also learnt that the Lok Dal’s differences with the Congress were not confined to seat distribution alone. A reliable Lok Dal source admitted that there was disagreement over the manifesto also.

Kerala Chief Minister Mohammed Koya called on Governor Jyothi Vencatachellum and tendered the resignation of his 51-day-old ministry. The governor accepted the resignation and requested Koya to continue in office till alternative arrangements were made. Koya, after submitting the resignation, said that the parties presently with him would jointly fight the Lok Sabha poll and state assembly elections likely to be held soon.