Bapu, you will have to tell us how to wipe the tears from every person's eye 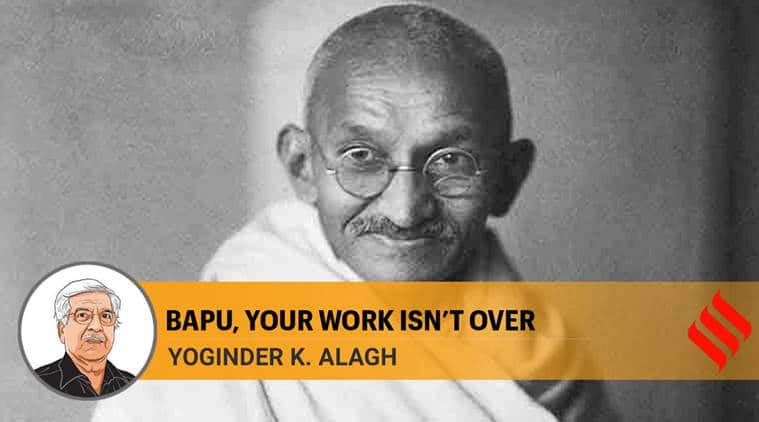 One hundred and fifty years of a major event calls for gala spectacle. In ancient Rome, such spectacles would take place at the Coliseum. We do that in two-minute bytes on TV channels. I was also asked to participate, but chose to stay away. I remembered the Urdu poet “Hum has deiye; hum chup rahe” (I laughed; I kept quiet ). The only serious byte I got was that by the Gandhian, Sudarshan Iyengar, angrily telling one anchor that we have done nothing on Gandhi’s views on a terribly important issue, agriculture. Then there was an anguished piece by Tushar Gandhi.

In 1997, Bapu’s memories were fading with the globalising reform regime. The Gandhi Smriti and Darshan Samiti organised “Freedom 50 Lectures” in different parts of India. The director of the Samiti, N Radhakrishnan, was able to get some of these lectures published in a book, Gandhi and the Changing Facets of India. I am told it sold reasonably well — it had pieces by EMS Namboodripad, C Subrahmaniam, Ravindra Verma, Surendra Mohan and me, among others. I wrote on Gandhi and the Indian economy in the 21st century.

Let us critically examine the relevance of Gandhi’s main economic ideas. The first is that wants should be limited. This is important in a poor economy. You have to provide for the future (high savings rate) and the poor. But the policy-makers were against “forced savings” and now consumption is the driving force of the economy. Khadi is passe, unless presented on the ramp. Such communication makes consumption both a product and an industry. If you say China has a savings rate of 40 per cent and ours has gone down from 32 per cent to 29 per cent, you are against reform.

The more serious question is that the world of finite resources in a fundamental sense can’t afford such consumption. China and India are consumerist regimes but if their per capita consumption exceeds a quarter of the American levels, the world will explode or more correctly drown in climate change.

Bapu wanted self-reliant villages and relevant technologies. On the last bit, we followed him and succeeded beyond dreams. That was Verghese Kurien. In fact, at a more basic level, computerisation, new communication and fibre optics did it. So dairy agro-based development did the trick. Bapu’s technologically-savvy village became a reality. But not self-reliant. It provided for itself and trade. Also, not unexpectedly, organisations that focused on the village became big — KVIC, NDDB, Amul. They are now going global.

Now, this is where I differ with Gandhi — and duck. He was against trade. This is important, when you are addressing the imperialist. But, after the imperialist went, Bapu, we must trade. In fact, being a Bania from Porbandar, you may well agree with me. Most Gandhians don’t.

They are wrong and I am right. Fair trade helps both the seller and the buyer. Non-trading societies become authoritarian because wealth is dispensed by plutocrats. Yes, trade can degenerate into exploitation. But after Independence, we can elect regimes which regulate fairly. If they don’t, we must change them.

Bapu, you made us a mighty machine. A 100-crore people in a democratic phalanx. We are unbeatable if the goal is clear and we are organised for it. But, your work remains. Will we love the neighbour? Will we be your “vaishnav jana”? Will the tear be wiped from his eye? Come in our dreams Bapu and tell us how. Until then, you cannot just be the lord of the 150 years’ celebration because you still have a lot of work to do.

The writer, a former Union minister, is an economist