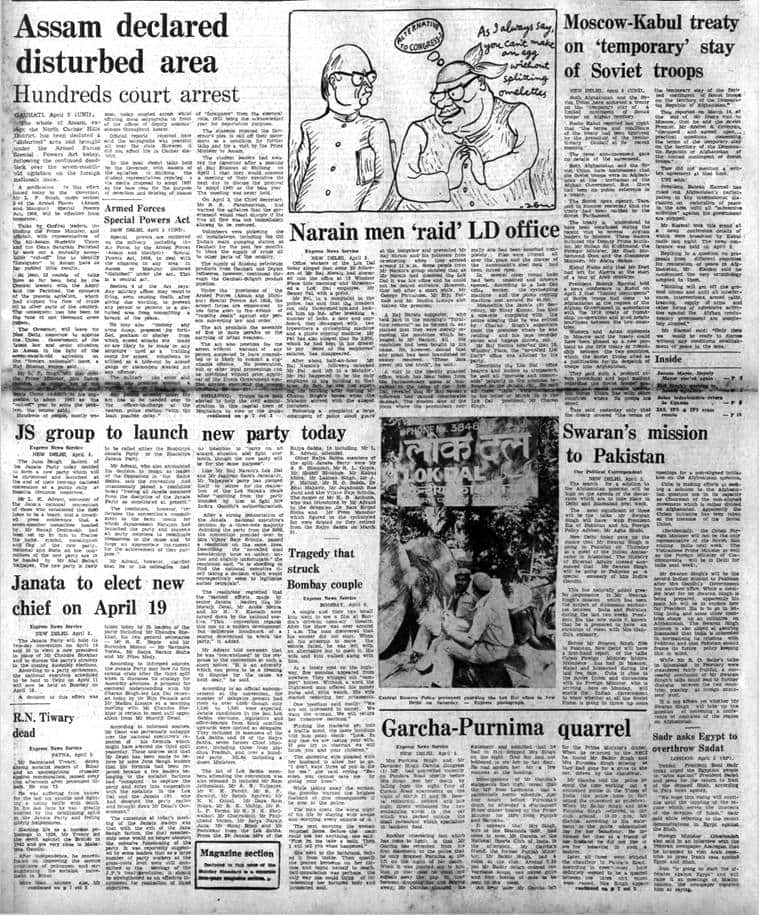 This is the front page of The Indian Express published on April 6, 1980.

The whole of Assam, except the North Cachar Hills District, has been declared a “disturbed” area and brought under the Armed Forces Special Powers Act (AFSPA), following the deadlock over the seven-month-old agitation on the foreign nationals issue. A notification issued by the governor, I P Singh, under section 3 of the Armed Forces (Assam and Manipur) Special Powers Act, 1958, will be effective from tomorrow. Talks by Central leaders, including the prime minister and officials, with representatives of the All-Assam Students Union and the Gana Sangram Parishad to work out a mutually acceptable “cut-off” line to identify “foreigners” in Assam have so far yielded little results.

The Janata Party will hold its two-day convention on April 19 and 20 to elect a new president in place of Chandra Shekhar and to discuss the party’s strategy in the coming assembly elections. According to sources, the Janata Party may face its first serious crisis after the third split when it discusses its strategy for assembly elections. A proposal for electoral understanding with the Charan Singh-led Lok Dal — renewed today by Biju Patnaik and Madhu Limaye at a morning meeting with Chandra Shekhar — is certain to meet stiff opposition from Morarji Desai.

Both afghanistan and the Soviet Union have endorsed a treaty on the temporary stay of a limited contingent of Soviet troops on Afghan territory. Radio Kabul reported that “the terms and conditions of the treaty had been approved by the presidium of the revolutionary council at its recent meeting.” The terse announcement gave no details of the agreement. Both Afghanistan and the Soviet Union have maintained that the Soviet troops were in Afghanistan at the invitation of the Afghan government. But there had been no public reference to a treaty.