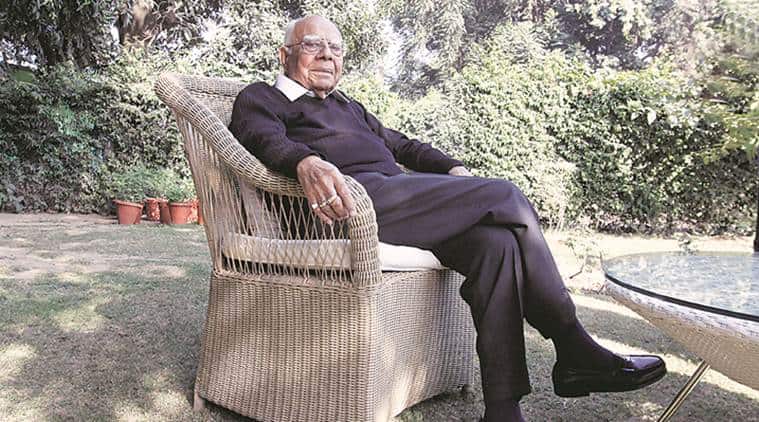 “My dear, I don’t give a damn.” When Margaret Mitchell made Rhett Butler say these words in Gone With the Wind, she had no idea that a formidable criminal lawyer in India would make this the anthem of his life. That man, born on September 14, 1923, was Ram Jethmalani.

Ram led a full life, an unconventional one marked by acute ascent, immense popularity, paradoxes and controversies. He saw India being born; any event, any person, any high profile case that makes up the collective memory of Indians, in some way featured Ram.

He was a child prodigy. Within three months of entering his first school, Tekchand Pathshala, Ram was promoted to the third standard and not much later, to the fifth standard. This made him the youngest, smallest boy in class. One day, when he was bullied by a burly young man who lifted him by his collar, Ram struck the boy, leaving him confounded. In a moment he turned from the victim to the aggressor, a trait that marked much of his life.

At every stage, Ram created a new normal — fighting his own case for admission at the Bar at age 17, making a case for abolition of religion in his law college magazine, straddling two wives, joyous libertine, crusader during the Emergency, he defended political radicals, mob bosses, accused godmen and alleged smugglers with equal ease and loyalty.

Ram was the force behind changing the definition of Hindutva and legitimising the ideologies of the Shiv Sena and BJP within the constitutional framework. He was open, unapologetic and irreverent about it. His single minded pursuit of what he believed in, his preternatural sense of right and wrong and his doggedness stirred emotions, provoked moral judgments but never evoked ambivalence.

Ram’s achievements are enviable — some celebrated, others understated. That he was a grand master of law, the undisputed champion of cross examination and rules of evidence is universally acknowledged. Perhaps the least recognised is Ram’s contribution in setting up the National Law School of India University (NLS), Bangalore, India’s first five-year legal programme for students after intermediate. NLS was a culmination of Ram’s friendship with R K Hegde, Karnataka’s chief minister. He had represented Hegde’s son, Bharat, when the latter was accused in a corruption case. Hegde returned the favour by directing the Bangalore University to allocate 14 acres for the law school on the city’s outskirts. The team of Ram, Upendra Baxi and Hegde grandfathered the National University Act of 1986, which led to the NLS starting out as a full university. But when the NLS was inaugurated, Ram and his name were missing. The school’s foundation stone was inscribed with the names of VR Reddy, the then Bar Council chairman and Professor Madhav Menon.

A few years later, a young Kashmiri boy, who had failed the entrance for NLS, made his way to Ram, who got him an admission on unusual grounds. The boy reciprocated by acing his class. After five years, he secured a seat at Berkeley but was again struck by the weight of the expenses. This time, too, Ram showed up.

I remember asking him once how he would like to be remembered. His response was: “As a good teacher who could make a difference to the lives of the young.” And, why not? Even at 93, he flew every Friday evening after court to Pune to lecture at the Symbiosis College. The man who drank Cognac at home so he wouldn’t waste money on expensive liquor in hotels, chartered a plane at his own expense to take a lecture in Chandigarh because, “the students were waiting to hear him”.

While his legal credentials are irrefutable, Ram’s political legacy is ambiguous. His political career was determined by his personal equations and several of his political actions were on a personal pique. He allowed personal disappointments to move him away from fixed positions, but he had the liver to take the consequences too, he was that sure of his moral radar and intellect. This is what made him invulnerable.

Ram was sui generis. I doubt there will be another quite like him. Sometimes the aggressor, sometimes the defender and at other both, Ram didn’t belong to any one man, party, institution or idea. The “sinner with a clean conscience” has finally boarded onward from the “departure lounge”. Darlings, lets bow to his free spirit.