Megha joshi the masters and their muse 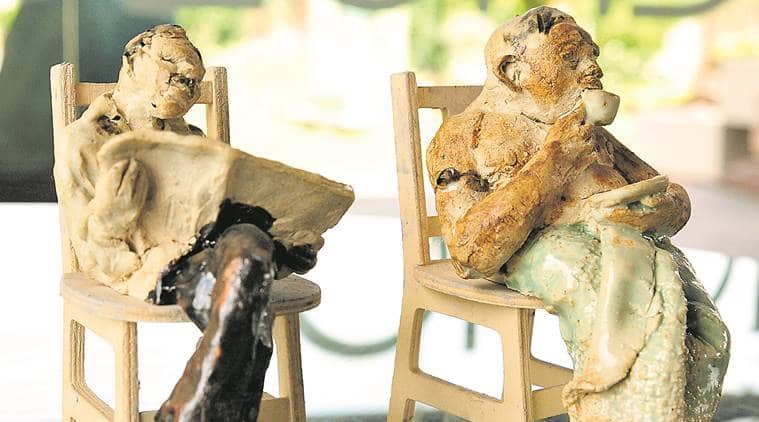 When Gurgaon-based artist Megha Joshi attended the artists’ residency themed around migration at Art Ichol, an arts centre in the village of Ichol, Maihar, Madhya Pradesh, she pondered over how people think of identity in terms of ethnicity or nationality. Observing how people move around for various reasons, be it for marriage, asylum, refuge, love, education or economic reasons, she began thinking about the idea of home. As she visited ancient Hindu temples in the vicinity, she observed the innermost sanctum housing the murti, called the garbha griha, where garbha refers to the womb and graha stands for home.

She says, “I realised that the womb is our first and only home. Every human being has had their first home and after birth it has only been a matter of constantly moving and searching, either by circumstance or choice.” It comes as no surprise that her sculpture titled Garbha-Griha – The Womb Is The Only Home, at Triveni Kala Sangam, made using ceramics, wood and vermillion, has two hands forming the yoni mudra (yoni translates to uterus in Sanskrit).

The exhibition “The Art Ichol Sculpture Show” features 50 Indian and international artists, including well-known Japanese ceramic artist Saturo Hoshino and German artist Julia Klemm, displaying sculptures made using bronze, stone and ceramics. These were created during the artist-in-residence programmes at Art Ichol, a platform that encourages the creation and sharing of creative arts. Ambica Beri, the founder of Art Ichol, says, “It is in the middle of rural India, with world-class facilities for bronze-making, stone-making and ceramics. Many international artists have been here in the last three years. I felt that the work from here needs to be shared in an exhibition.”

Glossy cow sculptures in ceramic reveal the creative genius of Uday Singh, a farmer, who turned up at the centre and told Beri how he liked creating with his hands. He soon learnt the art of making sculptures, taking tips from master artists visiting the premises. Renowned artists Laxma Goud, Anupam Sud, Jayasri Burman, and Paresh Maity have visited the centre. Beri says, “There is also skill development and engagement with the community. Now this is an alternate profession for Singh. His works were sold out at shows. He no longer does farming.”

Tiny bronze sculptures by Kolkata-based artist Debabrata De ring in the magic of everyday. Old men sitting on a park bench gossip – a classic view during a stroll at most parks – while two men are seen reading the morning newspaper perched on chairs. “Long before malls became popular, as a child growing up in the ’60s, I would often come across such scenes everyday in the streets of Kolkata.” Western Australia artist Holly O’Meehan brings out the interplay between crochet and ceramics, with brown and off-white vases. Their top part is made of local yarn and rope, and the lower half is sculpted in ceramic. The exhibition closes on December 9

Global Day of Parents 2020: Date, Significance and Quotes to Mark the Occasion