Vidya Balan, Taapsee Pannu, Kirti Kulhari, Nithya Menen, Sonakshi Sinha, Sharman Joshi and Akshay Kumar came together for the trailer launch of their new movie, Mission Mangal. It was interesting to see how the female cast of the film, which is based on the Indian Space Research Organisation’s Mars Orbiter Mission, opted for traditional wear at the event. The look is not very different from their on-screen roles, with the leading ladies (except Sinha) seen in beautiful drapes even in the film’s trailer.

For the event, while Sinha, Menen, and Kulhari opted for simple yet stunning saris, Balan and Pannu added an element of drama to their saris, giving it an Indo-Western look.

Menen was seen in a beautiful grey Raw Mango organza sari which had floral prints. The actor paired it with a black blouse and stylist Bibi Zeeba Miraie rounded off the look with accessories from Varun Raheja. The Kalank actor was seen in a stunning a pastel pink floral-printed sari with a golden border from Ekaya at the launch event. She teamed the sari with a strappy silver blouse, and opted for silver danglers to accessorise the look. Keeping it simple, she opted for a thick winged eyeliner and a nude lip. 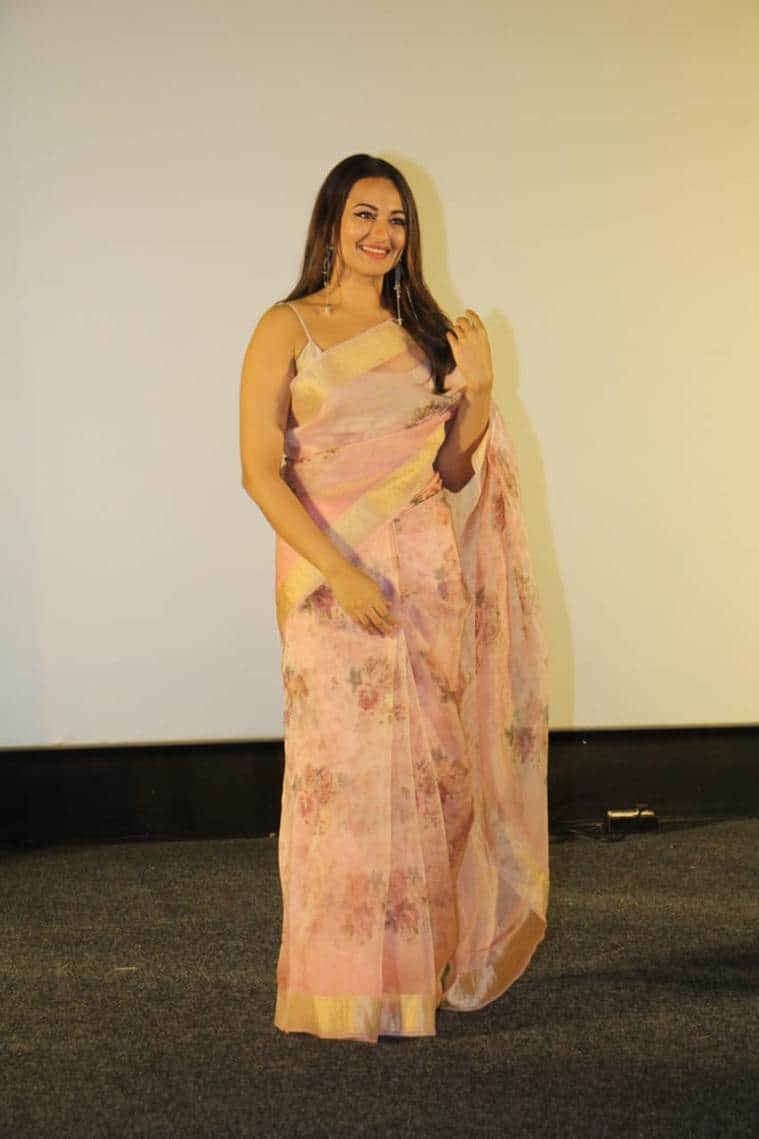 Balan was spotted in a black silk sari from Raw Mango. However, it was no regular drape and she paired it with a matching silk jacket which had embroidery around the pockets. The sari, which featured a golden border and motifs, was accessorised with a pair of earrings and a ring from Raniwala. For her make-up, the Kahaani opted for kohled eyes and nude lips, and kept her hair loose and neatly parted at the center. Pannu went for an interesting look and opted for a white sari pantsuit from Starch. The white ensemble featured a matching drape that was styled to look like a pallu and was draped in a similar fashion. She styled the look with strappy white heels and a diamond choker — which added some bling to the look. She too went in for classic kohled eyes and nude lips, and centre-parted hair pulled back in a ponytail. Kulhari looked lovely in a metallic gold sari which was teamed with a striking pink blouse. She finished her look with a neatly tied bun and a choker.