Leh: A total of 299 women dressed up in traditional Ladakhi wedding attire danced together to mark the last day of the Naropa festival and also created a Guinness World Record in the process.

The women, aged between 18 and 60, wore heavy coat-like 'gongchas' with 'perak' headgear as they danced on Thursday at an altitude of over 4,500 metres above sea level at Hemis, a Buddhist monastery situated 45 km from Leh.

"They have broken the record with 299 successful participants. This is a new Guinness World Record title... With this I declare that all of you are officially amazing," Dangarikar, who looks after records happening in India and Southeast Asia, said on Thursday.

New record: Largest Ladakhi dance 💃🏽
In the foothills of Hemis Monastry in Ladakh, India, 299 women in traditional Ladakhi attire danced to celebrate the closing day of the Naropa Festival. pic.twitter.com/xnFgCXgHss

Thousands of people from across the Himalayas gathered at Hemis to celebrate the life of Buddhist philosopher and scholar Naropa, who lived between 1016 to 1100 CE, in their tradition ways with singing and cultural events.

The five-day festival, started on Sunday to celebrate 1,000 plus years of the life of Naropa, also witnessed unfurling of 85-feet thangka — Buddhist painting on cloth — which the monastery claimed to be "the largest silk-embroidered brocade of Buddha" in India. Situated on a hill-top, Hemis is a calm place which only witnesses crowds during the festival season.

Famous as the Himalayan Kumbh, the Naropa Festival is celebrated after every 12 years of the Tibetan calendar.

The festival, however, took place this time after two years as many of the devotees could not attend it in 2016. The monastery is also planning to make it an annual event from this year onwards. 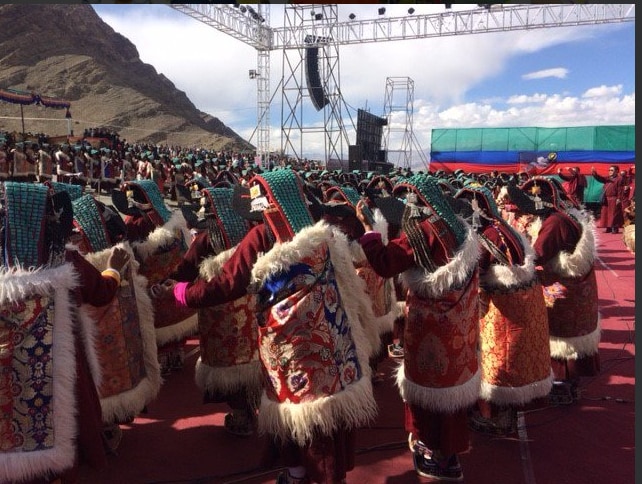 Speaking at the closing ceremony, one of the members of the organising committee said that the festival is a platform to "showcase the rich and divine heritage of the Himalayan region".

"It is a platform for all to come together and to encourage our people and artists.

The celebration included teaching lessons of Naropa, prayers and religious performances by monks and nuns.


The holy relics of Naropa — whose life is celebrated during the festival — were brought in a grand procession to the Naro Photang, situated three kilometers from the monastery.

The followers of Drupka Lineage from India, Tibet, and other parts of the world queued for hours to see the relics put on display.

The holy relics are the six bone ornaments of Naropa and are one of the most revered relics of Buddhism and historic symbols of the great Himalayan odyssey. Naropa wore the ornaments upon achieving enlightenment.