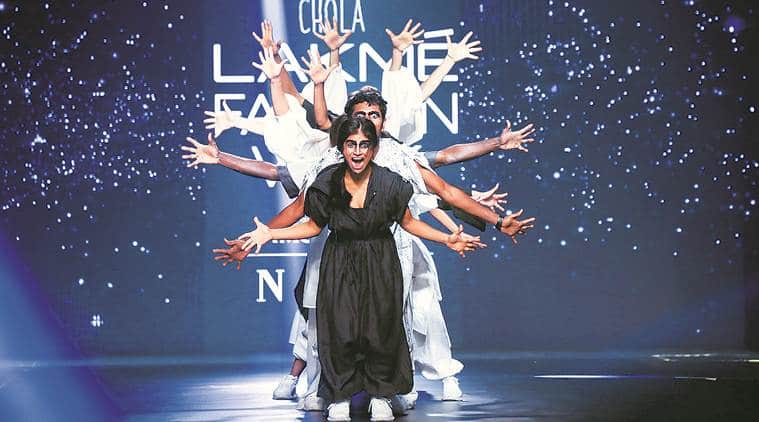 Performers at the Chola show

Maybe it’s the heat — after all Mumbai was a sweltering 30 degrees on Friday — that kept most of Bollywood away from the Lakme Fashion Week Summer Resort 2020 (LFWSR20) edition. Last few editions had the likes of Arjun Kapoor and Ayushmann Khurrana. And if not that, there’s usually enough drama in the front rows as well, with the who’s-who of Bollywood and Mumbai’s creme de la creme seated precariously on the thin benches — be it Shahid Kapoor, Karan Johar or cricketer Hardik Pandya. But this edition seems a bit lacklustre. The Sustainable Day had some interesting takes; it kicked off with a ‘women in sustainability’ show that had designer Jayati Goenka, and labels helmed by women — Medium, Buna and Sadhna.

The day ended with Ritu Kumar making a comeback on the ramp after a decade, with a mammoth show that had Aditi Rao Hydari as the showstopper. The other notable shows of the day were by Eka and Telangana State Handloom Weavers Cooperative Society, who had Sania Mirza — given her Hyderabad roots — as their showstopper. Ikat dominated the collection, and we also saw some merino wool creations. But one wonders if merino wool was appropriate, given the current edition is the summer-resort one. The high point of the day was the super energetic show put up by Chola, the label run by Sohaya Misra, in collaboration with Reebok. Blended with an adrenaline-induced performance by Omaggio, a dance performance company, which had aerial acrobatics and acts that would not look out of place at a Cirque De Soleil act. Adding to it were live drummers and lighting, which if nothing else would make your heart race because of the impact value. As for the clothes, there were boxy jumpsuits, layered dresses, biker jackets, drop crotch pants and unisex voluminous capes, which could all fit into the umbrella term of anti-fit and athleisure. Aditya Roy Kapur was the showstopper in an all-black outfit — pairing drop-crotch pants with a shirt. The neon-soled shoes did break the monotony, predictably so.