Anushka Sharma and Virat Kohli, along with other Indian cricket team members, attended the launch ceremony of Arun Jaitley Stadium, previously Feroz Shah Kotla Stadium, where one of the stands was also named after the Indian captain. The stunning couple, as always, wooed us with their chic style. While Kohli looked dapper in black trousers, white shirt and grey bundi — which was the team dress code; Sharma opted for an ethnic look from Sabyasachi Mukherjee.

The Pari actor, much like always, gave us major fashion goals in a midnight blue suit that she teamed up with heavily embroidered matching dupatta. The dupatta perfectly balanced the plain suit and added some bling to the look as well.  The ensemble is ideal if you are looking out for some ethnic inspiration for coming festive season.

She completed the look with a classic middle-parted neat bun and chandbali earrings, which is the Bollywood actor’s go-to hairstyle when it comes to fuss-free traditional looks. For makeup, she went for subtle shades that beautifully rounded out the look. 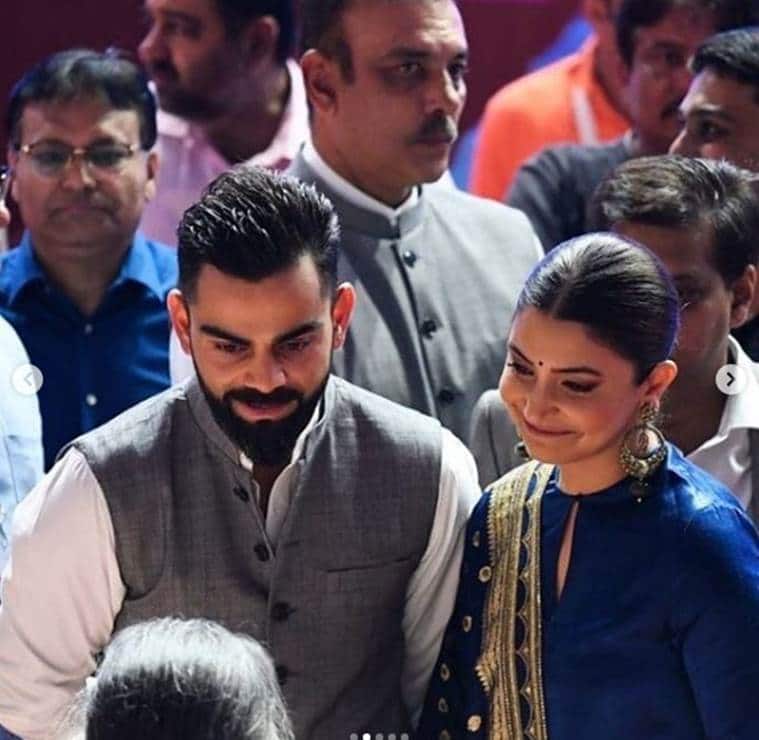 Later the couple was spotted at the airport acing the travel look in comfotable tracksuits. And if you are a fan of pastel shades, then Sharma’s nude coloured tracksuit from her label, Nush is just what your wardrobe needs. We like how the actor ditched white sneakers and teamed her travel gear with matching shoes. To keep up with the fuss-free vibe of her outfit, the actor opted for a pair of silver hoops to complete the look. Kohli, on the other hand,was seen in a white sweatshirt and denims.