After 11-Hour Wait For Ration, Women Hit By Cop With Lathi In Noida 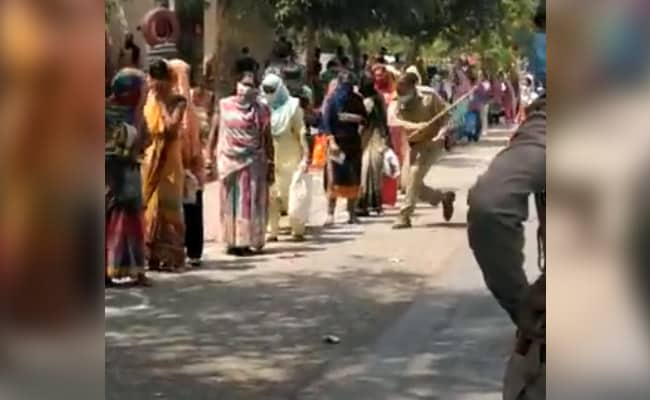 Noida: A policeman is seen in a video grab thrashing women waiting for ration amid shutdown

A policeman in Uttar Pradesh's Noida was seen on camera hitting women who had been standing in a queue for hours to take home ration amid the coronavirus pandemic.

In the mobile video, a man in white shirt is also seen pointing towards some women at different areas of the queue to single them out for thrashing with a lathi.

Sources said the women had been waiting in line since 5 am on Friday to take ration. But even at 4 pm or 11 hours later they were yet to get their turn. They blamed the long wait on the ration distributor for choosing to distribute food to only "his people" first.

The policeman is seen in the video walking towards the women and swinging his lathi on one of them. Then he drags a woman out of the queue and makes her leave.

The man in the white shirt who is reportedly connected with the ration distributor again points to some more women in the back of the queue, after which the policeman goes there and thrashes them.

The Noida Police tweeted that the sub-inspector seen in the video, Saurabh Sharma, has been suspended after an investigation.

The state government has stepped up efforts to give ration to the poor amid the coronavirus lockdown. Thousands of daily wage workers are out of work as a majority of businesses are shut. Pressure is piling up on them to provide for themselves and their families.

5 Critical Questions About Pet Health Answered By An Expert

The Crown Bringing Back Unforgettable Moments Of Princess Diana's Style

Quiz: Which Superhero Does Your Partner Resemble Most Like?

Celebrity-Approved Ways To Add Blue To Your Wardrobe