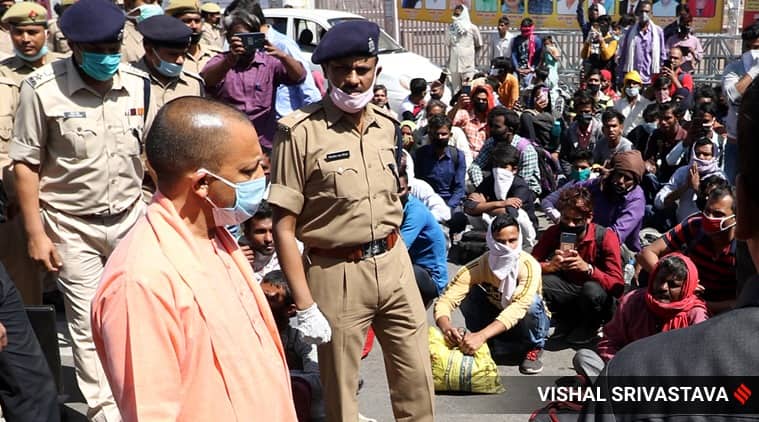 Uttar Pradesh Chief Minister Yogi Adityanath Friday directed the Ghaziabad administration to invoke the stringent National Security Act against six quarantined members of the Tablighi Jamaat after nurses and medical staff of a Ghaziabad hospital alleged that the men not only refused to maintain social distancing but also misbehaved with them.

“These people will not follow the law, neither will they listen to the administration. They are enemies of humanity. What they did with the female medical staff in the hospital, it is a criminal act. National Security Act is being imposed and the guilty will not be spared,” Adityanath said, a day after the Ghaziabad hospital’s chief medical superintendent forwarded the staff’s complaint to police.

In Madhya Pradesh too, NSA has been slapped on four of seven arrested for attacking a medical team in Tatpatti Bakhal locality of Indore on Wednesday.

The NSA is a stringent law under which a person can remain in detention for up to 12 months without a charge. The person can appeal before a High Court advisory board but has little or no access to a lawyer.

The six men at the Ghaziabad quarantine facility had attended a congregation at the Nizamuddin Markaz in Delhi last month. Traced to Uttar Pradesh, they were sent to the quarantine facility. Health officials said that of the six, one tested positive for coronavirus, while five remained under observation. Late Friday night, all were shifted to another institute.

Ghaziabad SSP Kalanidhi Naithani said: “A probe had been set up into the allegations made by the nurses and medical staff. In view of prima facie facts, an FIR was filed under IPC sections 354 (outraging modesty), 504 (provoking breach of peace), 270 (punishment for spreading of disease), among other sections. Investigation is underway and strict action will be taken.”

In Lucknow, Additional Chief Secretary Awanish Awasthi said: “For the past three days, an exercise is being conducted across the state regarding the Tablighi Jamaat. While 1203 people have been identified, 897 have been tested. So far, 47 of them have tested positive in the state.”

He said 228 passports have been confiscated and 35 FIRs have been registered in 16 districts. He warned of strict action against those who refuse to give samples for testing. He said the government was also preparing a list of religious leaders and the Chief Minister would soon hold a video-conference with them to spread the message on the threat of the coronavirus.

Awasthi said action has also been taken against fake news on social media — nine cases against Twitter posts, five on Facebook, four on WhatsApp, and an FIR in Ayodhya.