Woman Forced To Give Birth In UP Hospital Corridor, Told "No Bed" 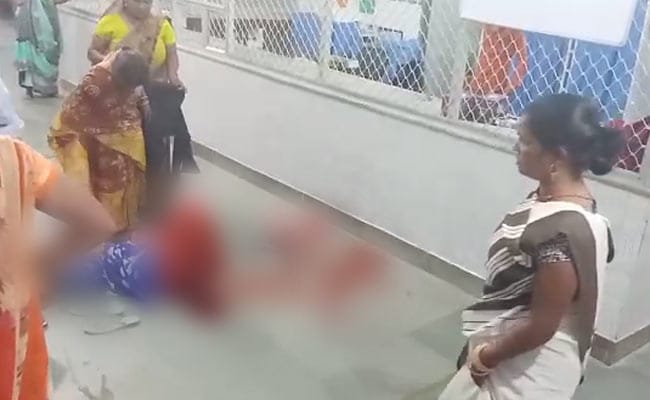 In what appears to be a case of criminal negligence by doctors and staff at a government hospital in western Uttar Pradesh, a woman was forced to deliver a baby in the corridors of the hospital on Sunday evening because doctors and nursing staff on duty allegedly turned her away, saying there were no beds available to admit the woman after the delivery.

Ram Manohar Lohia Hospital is the only specialised government hospital in Farrukhabad district.

Visuals shot on a mobile camera by an onlooker, and shared with local journalists, show the woman lying in the hospital corridor with blood all around her. A baby, whose gender hasn't been confirmed yet, can be seen lying in one end of the corridor, on what appears to be a piece of red cloth.

A few minutes later, another woman, who appears to be a relative, holds the baby wrapped in more clothes.

Reports say the woman was taken to the hospital's labour room by the doctors on duty after she gave birth to her baby.

The district magistrate of Farrukhabad, who is the top government officer in the town, said she has ordered a probe.

The same hospital was in the news in 2017 too, when 49 babies died in a month there, just days after the child deaths at a hospital in eastern Uttar Pradesh's Gorakhpur due to lack of oxygen. Grieving parents blamed a shortage of medicine and oxygen for the Farrukhabad hospital deaths too. The state government, however, had emphatically denied it.

In January this year, a hospital in Uttar Pradesh's Jalaun district turned away a pregnant woman who was forced to give birth on the roadside.

India has seen a 20 per cent fall in neonatal deaths, which refers to deaths within the first month after birth of a child, between 2011 and 2016, according to the World Health Organisation. There has also been a 33 per cent improvement in survival rate among children between the first month and a year after birth, referred to as post-neonatal. But despite the improvement, 1 in 40 babies die at child birth in India.