For the second time in as many days, Bihar Chief Minister Nitish Kumar took a swipe at RJD leader Tejashwi Yadav and his promise of sanctioning 10 lakh permanent government jobs, if he and the mahagathbandhan - the opposition alliance - are voted to power in elections that start next week.

Addressing an election rally in Gopalganj district today, Mr Kumar - who is seeking a fourth term as chief minister - asked Mr Yadav: "I see this promise about jobs but people don't have knowledge or experience (to fulfill this promise). Have you seen such a thing in the entire world? Why only 10 lakh? If you're giving jobs, then give jobs to everyone."

"And if you give all these jobs, then for the salaries will you take money from jail or distribute fake currency?" Mr Kumar added in a reference to Tejashwi Yadav's father - former Chief Minister Lalu Prasad Yadav - who is currently in jail after being convicted in a corruption scam.

Nitish Kumar then appealed to voters to not be swayed by such promises.

On Monday too the Chief Minister ridiculed Mr Yadav's promise of providing jobs, declaring the 31-year-old RJD politician had neither knowledge nor experience, and "may start his own business" in the name of providing employment - seen by many as another swipe over Lalu Prasad Yadav.

The Chief Minister asked Mr Yadav how many jobs his party had provided while in power for 15 years. "We gave over six lakh jobs and have undertaken employment drive for 70,000," he said.

Unemployment has become a hot-button issue in this election, particularly after 32 lakh people - who had migrated to other states to find jobs - were forced to return because of the Covid pandemic.

They came back to promises of jobs made by Nitish Kumar but, so far, that has not happened. This has led to disenchantment with his government, which carried out skill mapping with much fanfare, and has given Tejashwi Yadav another opportunity to attack. 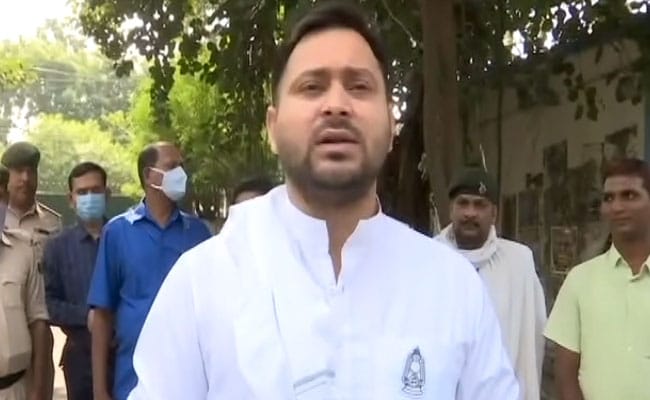 Tejashwi Yadav has promised 10 lakh government jobs at his first cabinet meeting, if he is elected

Last month Tejashwi Yadav made 10 pre-poll promises to the people of Bihar, including the provision of 10 lakh permanent government jobs and said over 22 lakh people had already registered on his "bedojgari hatao" web portal.

On Sunday he told Bihar had a 46.6 per cent unemployment rate and that the Nitish Kumar government had no vision.

Mr Yadav, who has said there are lakhs of posts for government doctors and vacancies in the police that need to be filled, has also hit out at Nitish Kumar's claims that he is inexperienced, pointing out that he has served as Deputy Chief Minister.

"I heard Tejashwi Yadav will give jobs to 10 lakh people... They will give the order for 10 lakh country-made pistols and Bihar will again see kidnappings and looting," Mr Fadnavis said.

Bihar votes for a new 243-member Assembly across three phases starting October 28, with results due November 3. Mr Yadav's RJD has allied with the Congress and Left parties, while Nitish Kumar's JDU is backed by the BJP.

"In Its Anxiety To Suppress Dissent...": Court's Sharp Words For Centre

Elderly Muslim Man Beaten Up, Beard Cut Off In Ghaziabad Near Delhi

Caught On Camera, Horrific Assault Of Doctor By Family Of Covid Victim

Can You Hold Oxygen Concentrators Without Licence: Court Asks Businessman

Govt approves Pfizer for 12-year-olds and above, CanSino and J&J get conditional registration

"It's Hat Season" For Shama Sikander. See Her Trending Pic From New York