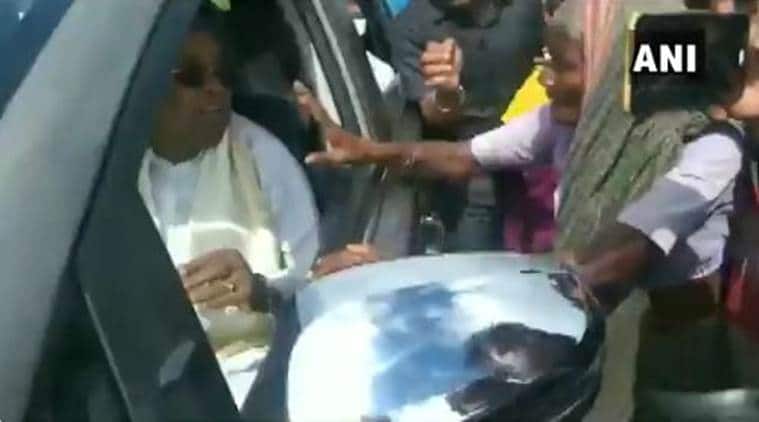 Former Karnataka Chief Minister Siddaramaiah faced an embarrassing situation on Wednesday when he visited his constituency Badami to take the stock of the damage due to floods. A video tweeted by ANI shows Siddaramaiah’s vehicle being gheraoed by flood-affected people while a woman questions him on the promises he had made before the Karnataka Assembly elections.

“We were told if we vote for you, we will get a house. Now you have got our vote, but we have not got the house. Who will give us the house?” the woman, who hails from a village in Badami, can be heard saying. The Congress leader can be seen hearing the grievances of the woman and then signals her to move aside to let his car pass.

#WATCH Karnataka: A woman from a flood-affected village in Badami, to Siddaramaiah during his visit to flood-affected areas near Badami: We were told if we vote for you, we’ll get a house. Now you’ve got our vote, but we’ve not got the house. Who will give us the house? https://t.co/ti4lVju7ru pic.twitter.com/LWAVvhVfSJ

Another picture that went viral during his visit to Badami shows the former CM standing on a broken road damaged by relentless rain in the past couple of weeks.

Siddaramaiah is not averse to controversy or being involved in unsavoury incidents. In September, Siddaramaiah was caught on camera . A video shows Siddaramaiah addressing the reporters. Moments later, as he was leaving, he can be seen talking with his aide and then slaps him and also pushes him ahead.

In January, a video emerged showing Siddaramaiah behaving in a rough manner with a woman party worker, who was among dozens of people who came to meet him in Varuna region near Mysore. The video shows the Congress leader repeatedly trying to ask the woman party worker to sit even as she tries to speak using a microphone.

Siddaramaiah is then seen grabbing the microphone — resulting in the woman’s dupatta being pulled along — and forcing the woman to sit down in front of him to explain herself.