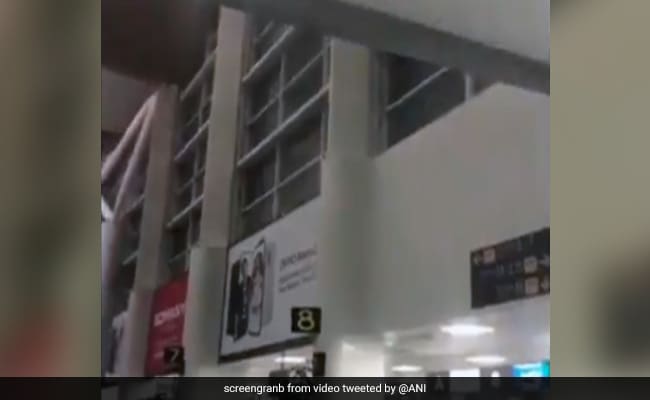 For people flying out of Delhi on Thursday evening, the flight delays due to heavy rain in the city wasn't their only problem. Water leaking was reported at the baggage check-in area at Terminal 1 of Indira Gandhi International Airport, according to news agency ANI.

Water can be seen dripping down from the walls and people in the area are seen shooting it on their phone cameras, in a video posted by ANI.

While the showers on Thursday evening brought down the city's temperature, operations at the airport were suspended for nearly half an hour. Light rain is likely to continue on Friday, the weather department was quoted as saying by news agency PTI. The maximum and minimum temperatures on Friday are likely to be around 34 and 24 degrees Celsius respectively, it said.

Flight operations at the Delhi Airport were suspended for 24 minutes due to extremely heavy rains accompanied by strong winds in the evening, said a senior airport official.

Airlines, including Air India and Vistara issued advisory on their Twitter handles, asking their passengers to arrive at the airport in advance.

Monsoon was supposed to officially end on September 30, but has so far shown no signs of retreating, an India Meteorological Department official had said.