Watch: UP Cop Gets Surprise 'Grooming' Session From Monkey 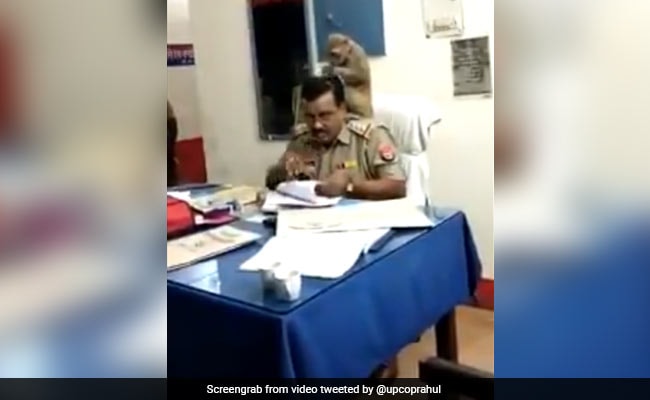 A UP police inspector hard at work received an unexpected surprise on Tuesday - a grooming session from a monkey. In a video shared online by a senior police officer, the inspector from the Sadar Kotwali Police Station in the state's Pilibhit district can be seen sitting at his desk calmly reviewing files while a monkey sits on his shoulders and runs its fingers through his hair, apparently looking for lice.

"The experience of these police officers in Pilibhit suggests that if you do not want to be disturbed while you are at work... use Reetha, Shikhakai or some other good shampoo," Rahul Srivastav, Additional Superintendent of Police, wrote on his official Twitter account.

As the video plays out, the cop, identified by local media reports as Srikanth Dwivedi, continues working while the voices of other people in the station can be heard, some of whom can't help but giggle at the unusual situation!

Meanwhile, in the window behind the officer, two men can be seen moving about as people contemplate how to get the monkey off the cop's back. One individual can be heard suggesting using bananas to distract the monkey.

Twitter users were left chuckling over the video, with one person suggesting the monkey may be a friend of the inspector and another calling the monkey's actions "free 'seva' (service)".

Grooming is an important daily ritual for monkeys and primates, whether in the wild or in captivity. Apart from helping keep each other free of ticks, lice and other parasite, it also helps develop and strengthen social bonds between different individuals in the troop and is a large part of their daily life.

Generally, however, they do not include humans in their grooming rituals.

Pilibhit district is also home to a tiger reserve - a 730 square kilometre forest that, according to the state tourism website, is the 45th in the country and is home to 127 species of animals, 326 kinds of birds and more than 2,000 flowering plants.

It was also where, in July, villagers beat an adult tigress to death with sticks in a brutal attack that triggered widespread outrage. A disturbing two-minute video of the incident was shared online.