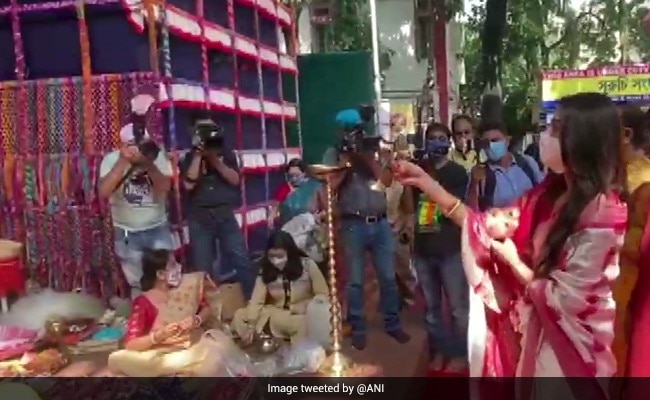 A two-minute video shared by news agency ANI shows the Trinamool Congress leader - in a red and white sari - dancing with several other women. The clip also shows her playing the drums, along with other traditional drummers -popularly known as Dhakis.

The TMC MP, while performing the traditional moves, is seen soaked in the festive spirit as others capture her performance on mobile cameras.

All the people are wearing masks and trying to adhere the government-mandated social distancing norms to check the spread of Covid.

Last month, the Trinamool Congress leader had received death threats on social media for dressing up as Goddess Durga for advertisements for a clothing line that she posted on Instagram on 17 September. Her office had then alerted the authorities.

This was not the first time, however, that Ms Jahan was threatened or abused on social media. Last year, she was abused for marrying a Hindu, wearing 'sindoor' or vermillion and participating in rath yatra soon after.

Dismissing criticism, last year, she was quoted as saying by news agency ANI: "I'm God's special child. I celebrate all festivals. I respect humanity and love more than anything."This year, the festive celebrations have been scaled down due to the novel coronavirus pandemic, which has affected over 3.4 lakh people in Bengal. Across India, more than 78 lakh have contracted the virus since January; over 1.17 lakh have died.