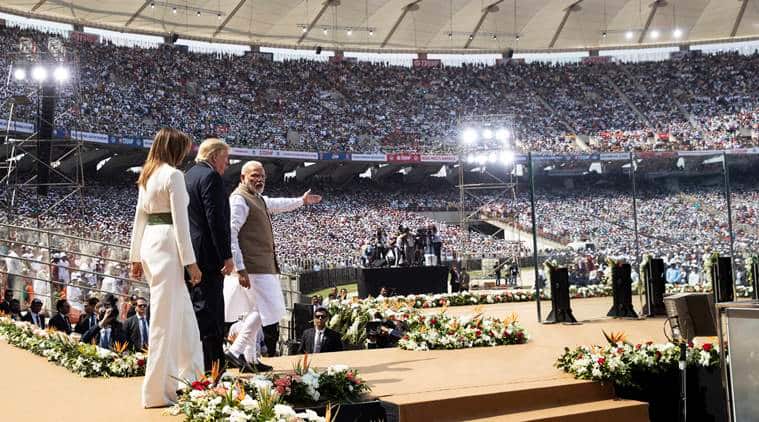 In his maiden visit to India as the president of the United States, Donald Trump Monday heaped praise on Prime Minister Narendra Modi at a massive “Namaste Trump” rally at Motera stadium in Ahmedabad.

Stating that India now holds a special place in the hearts of Americans, Trump said, “America loves India, America respects India and America will always be faithful and loyal friends to the Indian people.” He also announced defence deals between the two countries worth 3 billion dollars.

“The First Lady and I have just traveled 8,000 miles around the globe to deliver a message to every citizen across this nation: America loves India. America respects India. And America will always be faithful and loyal friends to the Indian people.” 🇺🇸🇮🇳 pic.twitter.com/w4hjQy6tUi

Loud cheers erupted from around the stadium as Prime Minister Narendra Modi invited Trump to address the crowd numbering in tens of thousands. Calling PM Modi a “tough negotiator”, Trump also announced that both the countries are chalking out “the biggest ever trade deals” on his visit to India.

“All over the planet people take great joy in ‘bhangra’ and watching bollywood films like DDLJ (Dilwale Dulhania Le Jayenge) and Sholay,” he said and then also referred to cricketing greats Sachin Tendulkar and Virat Kohli.

Modi too was all praise for the US president. “What you have done for healthy and happy America is getting good results. What you are doing for children in society is admirable,” Modi said.

Before Trump’s speech, Modi said history is being scripted at the Motera Stadium. “Five months ago, I started my journey with Howdy Modi. And today, my great friend Trump has started his journey in India in Ahmedabad with ‘Namaste Trump’. After the long journey, Trumps made their way to the Sabarmati Ashram,” said Modi, while welcoming them to the “biggest democracy in the world.” He also made the crowd chant “long live India-US friendship”.

The US president later visited Taj Mahal in Agra, before departing to Delhi. On his second day in India tomorrow, Trump is scheduled to meet Modi and hold extensive talks on US-India global partnership.