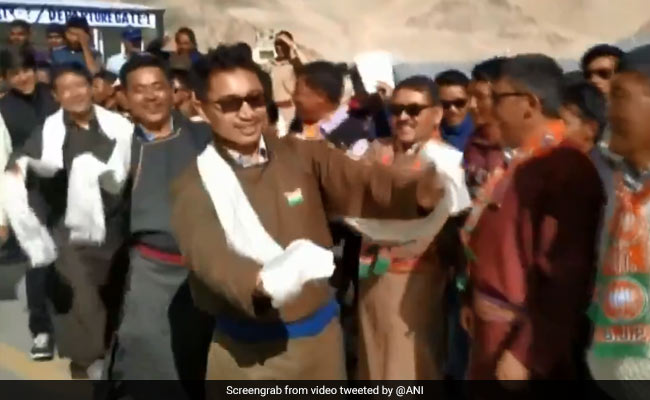 Jamyang Tsering Namgyal, the BJP MP from Ladakh whose speech in support of the government's move to end special status for Jammu and Kashmir went viral and earned him praise from Prime Minister Narendra Modi, celebrated India's 73rd Independence Day with a short dance that was caught on video by news agency ANI.

In the brief 28-second video that was posted on Twitter, Tsering Namgyal is seen wearing sunglasses and a dark brown 'goucha' (traditional Ladakhi dress for men), and leading a line of fellow dancers.

In his speech, the BJP leader held both Article 370 (a "temporary provision" in the Indian Constitution that grants autonomous status to Jammu and Kashmir, including allowing it its own constitution and flag) and the Congress responsible for Ladakh's "undeveloped" condition.

He had also said protests by parties like the National Conference of Omar Abdullah and Mehooba Mufti's People's Democratic Party should be ignored as they had treated the state as their "family business". If the move was implemented, only two families would lose their job, he said.

"In 2012, I went to Jammu and got in contact with BJP and its ideology. I came back to Leh and was made the office secretary of the BJP district office in Leh. This was the lowest post of the office," Tsering Namgyal told ANI.

"I accepted this responsibility. I used to write applications for people who came to the office as they were not literate or well read. Gradually, I was made a party spokesperson, " he said, remembering his rise through the ranks.

In a tweet, PM Modi gave a shout-out to the Ladakhi politician, saying he had coherently presented aspirations of people of the region in his speech.

"My young friend, Jamyang Tsering Namgyal who is @MPLadakh delivered an outstanding speech in the Lok Sabha while discussing key bills on J&K. He coherently presents the aspirations of our sisters and brothers from Ladakh. It is a must hear," PM Modi tweeted.

My young friend, Jamyang Tsering Namgyal who is @MPLadakh delivered an outstanding speech in the Lok Sabha while discussing key bills on J&K. He coherently presents the aspirations of our sisters and brothers from Ladakh. It is a must hear! https://t.co/XN8dGcTwx6

Home Minister Amit Shah, who presented the resolution to end the special status to Jammu and Kashmir in both the houses of parliament, also endorsed his views. "A speech full of facts that reflects aspirations of our brothers and sister from the Ladakh region," he tweeted.

I-League 2019-20 Live Streaming: When and Where to Watch Indian Arrows vs Chennai City FC Telecast