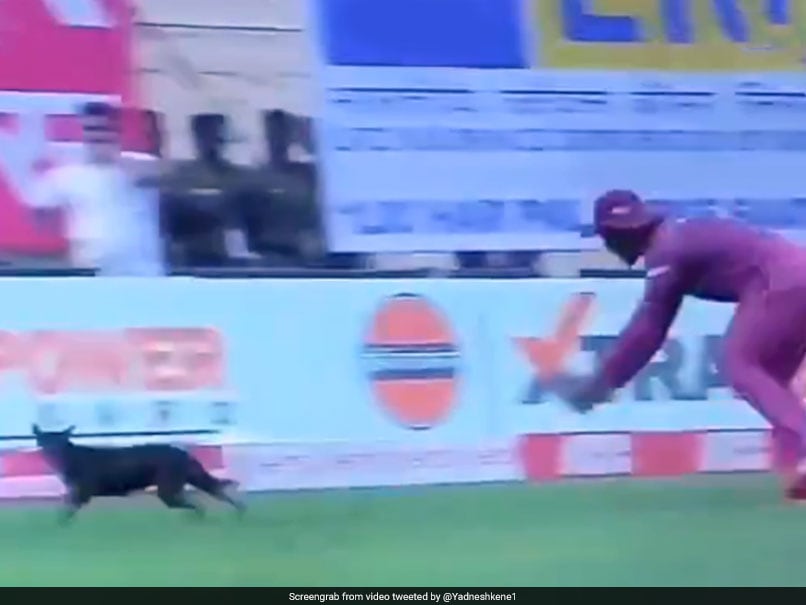 The first One-Day International (ODI) between India and West Indies in Chennai was halted after a stray dog barged into the ground, escaping the eyes of the security officials on Sunday. The incident occurred at the start of the 27th over of the innings, with Shreyas Iyer and Rishabh Pant out in the middle leading India's rebuilding process. The West Indies fast bowler Keemo Paul was ready to start his new over, with Iyer on strike. But the animal's arrival in the middle made Iyer wait for few moments before he could resume his innings. The ground staff came into the action quickly and tried to get the animal off the field. One of the West Indies players also tried to shoo the dog away. The dog, however, made all of them work hard by sprinting along the fence for few more moments before leaving the field.

Here are the videos:

#IndiavsWestIndies In comical scenes, a stray #dog has brought the first ODI between India and West Indies to a standstill after a mad dash onto the pitch after 26th over. #indvswestind #IndvsWI pic.twitter.com/zhr3MYl7V2

Talking about the match, Iyer and Pant batted positively and kept the West Indian bowlers at bay for almost 18 overs in which they added 114 runs for the fourth wicket.

The duo completed their respective half-centuries to bail India out of trouble, putting them on course for a competitive total in the first innings.

Iyer completed his fifth half-century, while Pant brought up his maiden fifty in 50-over format.

Iyer, however, couldn't covert his innings into a big one as he fell on 70 off 88 balls. His knock included five fours and one mighty hit over the fence.

After Iyer's departure, Pant continued to bat at over run a ball strike rate and eventually departed trying to clear the fence on 71 runs off 69 balls in the 40th over.

India scored 287/8 in their 50 overs despite losing a flurry of wickets towards the end of their innings.