At least 58 COVID-19 patients in Kerala have already recovered. (File)

Two people, who earlier did not show any symptoms of the novel coronavirus or COVID-19, have tested positive in Kerala's Pathanamthitta district, about 100 km from Thiruvananthapuram, officials have said. One of them is a 60-year-old man who had traveled from Dubai to Pathanamthitta; another is a 19-year-old student who had travelled from Delhi.

The state has swung into action after the cases came to the fore.

"This is a warning sign. Thousands of innocent, unknown people might also have come in contact with these asymptomatic carriers. The fact that they passed their 14-day quarantine period, without showing any symptoms, is further alarming. This means, we still need to tread a cautious path," District Collector PB Nooh told.

The 60-year-old has been under quarantine from March 19 to April 6. He was tested despite being asymptomatic because he returned from high-risk area. He had flown in from Sharjah to Thiruvananthapuram on March 19 and traveled by road to his hometown. 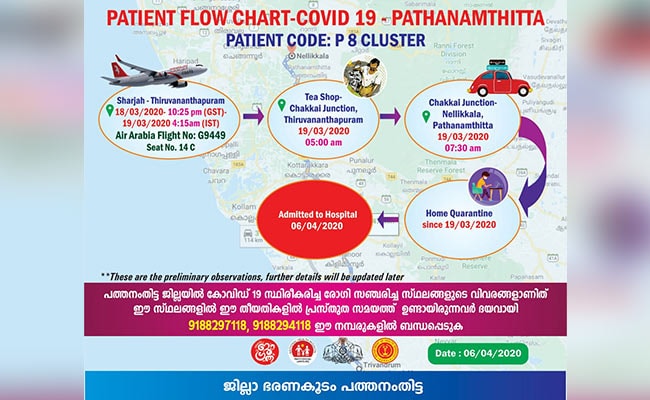 A route map of the 60-year-old patient has been shared by the state officials.

The teen student had boarded a train from Delhi on March 15. She arrived in Ernakulam on March 17. She then boarded a bus to her hometown, and then under quarantine. She was admitted to the hospital on April 4 after she tested positive despite being asymptomatic.

"We have started testing people who have traveled recently to high-risk zones or those who are in vulnerable categories due to their contacts, even though they may be asymptomatic," Pathanamthitta District Medical Officer AN Sheeja told. 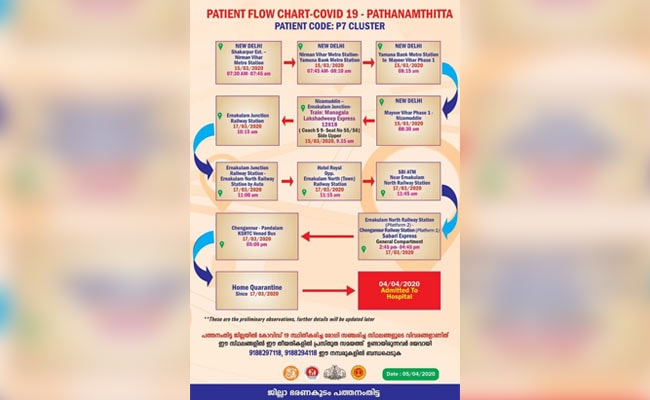 This is the route map shared by state for 19-year-old asymptomatic patient.

The detailed route map, showing their travel date, time, locations before they were under quarantine has been shared by the administration on their social media handles.

Of India's 4,421 cases, including 114 deaths, Kerala has reported 327 patients so far and two deaths linked to COVID-19 . Fifty-eight people in the state have already recovered.