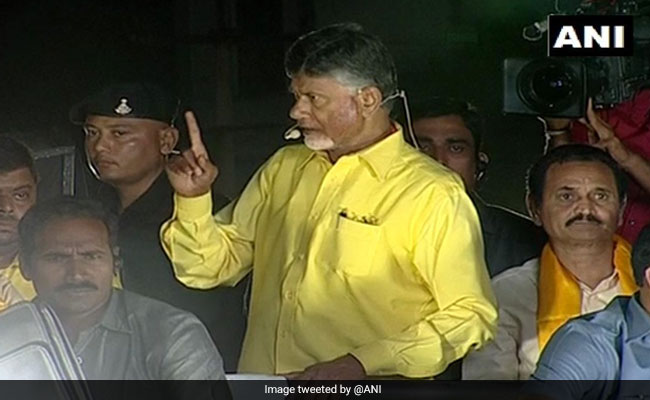 Andhra Pradesh Chief Minister and Telugu Desam Party chief, Chandrababu Naidu stepped up his offensive on YSR Congress at an election campaign in Visakhapatnam on Friday. He said voting for YSR Congress would be like "writing your own death warrant." The state, holding both assembly and parliamentary polls simultaneously, is witnessing a high-decibel campaign.

Accusing YSR Congress chief Jagan Reddy of "looting" public money, Mr Naidu said, "Voting for TDP will be the victory of people, but voting for YSR Congress is like writing your own death warrant. The Lok Sabha elections will decide the future of the state. People should vote for TDP for better future and development." The TDP chief also accused Jagan Reddy of misusing his father, YS Rajasekhara Reddy's power, when the latter was the Chief Minister of Andhra Pradesh.

Highlighting welfare schemes in Andhra Pradesh, Mr Naidu said, "I am like an elder son in every family. I gave financial support to 98 lakh DWCRA (Development of Women and Children in Rural Areas) sisters under the Pasupu Kumkuma scheme. I provided welfare pension of Rs 2000 to senior citizens. We will bring water from the Godavari to Visakhapatnam and the Uttara Andhra Sujala Sravanti project will be completed in a year."

Alleging that the YSR Congress chief was behind his uncle's killing, Mr Naidu said, "Jagan Reddy's paternal uncle was killed in his own house, but they tried to make people believe that it was a heart attack. They tampered with evidence and altered the crime scene," alleged the TDP chief.

YS Vivekananda Reddy, younger brother of Jagan Reddy's father and a former minister in the state government, was found murdered at his home in Kadapa last week. He had sustained severe injuries on his head, the police said and a murder case has been lodged.

In an open letter to Jagan Reddy, state TDP chief, Kimidi Kala Venkata Rao accused the former of playing politics over his uncle's murder. "Why are you playing politics over your uncle's dead body...You are trying to provoke caste and religious sentiments to get the Chief Minister's seat. In every issue, you are playing murky politics. You have joined hands with PM Modi and KCR (Telangana Chief Minister K Chandrashekhar Rao) who have cheated the people of the state brutally," Mr Rao said in his letter.

Local leaders of the TDP, yesterday filed nomination on behalf of Mr Naidu from Kuppam Assembly constituency, where he has won the polls six consecutive times in the past. He had contested from the seat for the first time in 1989.

The elections to the 175-member Andhra Pradesh Assembly are scheduled to be held on April 11 along with the Lok Sabha polls. The counting of votes for both will take place on May 23.