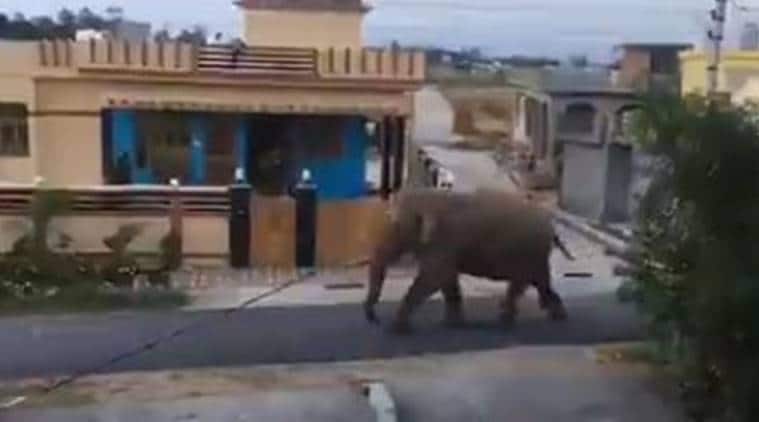 An elephant was spotted at a town in Haridwar

The Uttarakhand government has put its forest staff on alert following some incidents of movement of wild animals in towns and villages amid the lockdown to curb the spread of COVID-19.

It is learnt that three recent incidents of wild animals entering human settlements has prompted the move. One such incident has been reported from Haridwar, where an elephant entered the town on the night of April 2. It was spotted at Bhagat Singh Chowk and chased away by the forest staff, but it returned after a couple of hours. This time, it was spotted on Har ki Pauri ghat and was also seen taking a dip in Ganga river before returning to the forests.

Local forest officers said while the movement of elephants in Haridwar is not new, this is the first time in recent times when an elephant reached all the way to Har Ki Pauri.

A key attraction for pilgrims, Har Ki Pauri witnesses hundreds of people taking a dip in the Ganges on normal days. But with the lockdown in place, gatherings have been prohibited.

In another incident, a leopard entered Papauli village in Almora forest division on Sunday and injured two men in separate incidents. The animal was caught by the forest staff after a two-hour operation.

In a similar incident in Naugaon village of Pauri Garhwal district Sunday, a wild bear attacked a man and left him injured.

A senior forest department officer said such incidents indicate two types of behavioural changes in wild animals. One could be a positive change like a release of stress, particularly in elephants. “It could be a million dollar question for us if we see movement of tigers — when corridors are blocked during the lockdown period — to that portion of Rajaji (Tiger Reserve) where tiger population is nil,” said an official. The official added that a negative behavioural change could be the animals’ approach during lockdown to places like roads and schools, adding that movement of the elephant to Har ki Pauri indicates that staff and people need to be cautious.

Chief Wildlife Warden Rajiv Bhartari said, “Forest staff is on alert. They are responding to every information and keeping a watch on the situation.”