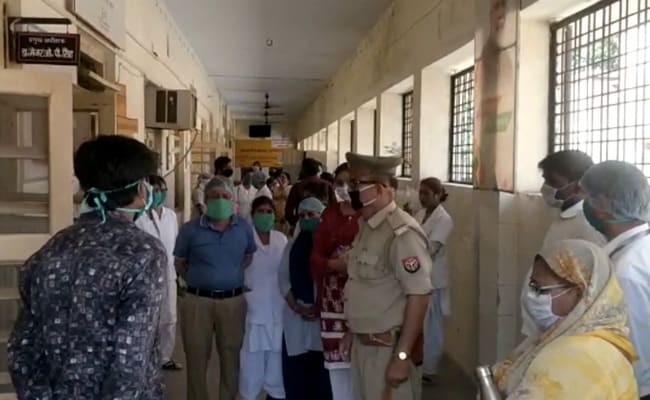 A 25-year-old man from Uttar Pradesh's Basti district who died on Monday evening became the state's first COVID-19-linked death today after his samples tested positive for the novel coronavirus. Amid concern over the state's first virus-linked fatality, red flags have been raised after it emerged he hid travel history details from the authorities.

The authorities are also very worried about the number of people who may have been infected or exposed since he was admitted to a hospital in Basti, which is around 50 kilometres from Gorakhpur.

Doctors at the hospital said the man had been brought by relatives on March 28 and complained of breathing problems. The doctors also said the man and his family hid the fact he had travelled to Mumbai and, with no travel history to guide them, they admitted him to the general ward, where the virus may have spread to staff and other patients.

"The man gave no information he had a travel history. This is the fault of the patient and his relatives. He said he had been ill for a month and had no fever at the time. So he was diagnosed at the OPD (outpatient department) and admitted to general ward," Dr OP Singh, hospital-in-charge, told reporters.

"If he or his relatives had said, even once, that he had returned from Mumbai, we would have immediately sent him to the coronavirus ward," he added.

The Uttar Pradesh government has confirmed that the man had, indeed, returned recently from Mumbai.

On Sunday the man was shifted from the hospital in Basti to a high-profile super specialty medical facility in Gorakhpur.

However, here too he was admitted to the general ward and not the one reserved for COVID-19 patients.

He died Monday evening and his body was handed to relatives who brought it to Basti for the last rites.

Basti district administration has now sealed off the area in which he lived. All relatives he had contact with have been identified and put into quarantine, as have doctors and paramedical staff at both Basti and Gorakhpur hospitals.

Patients and relatives who came into contact with him during his stay at either hospital have also been identified and will be isolated and tested.

"We are having to trace a large number of people. Patients and their families have to cooperate otherwise it is extremely difficult for us to deal with these challenges," Dr Vikasendu Agarwal, Director (Epidemics) at the UP government's Integrated Disease Surveillance Programme (IDSP), said.

According to state government data, UP has, so far, confirmed 103 cases of the novel coronavirus. The biggest clusters are Noida in the National Capital Region (39 cases) and Meerut district in the western part of the state (19 cases).

Across India the number of active COVID-19 cases has crossed 1,200 with at least 35 deaths reported. Worldwide there are over 8.6 lakh cases and more than 42,000 people have died.