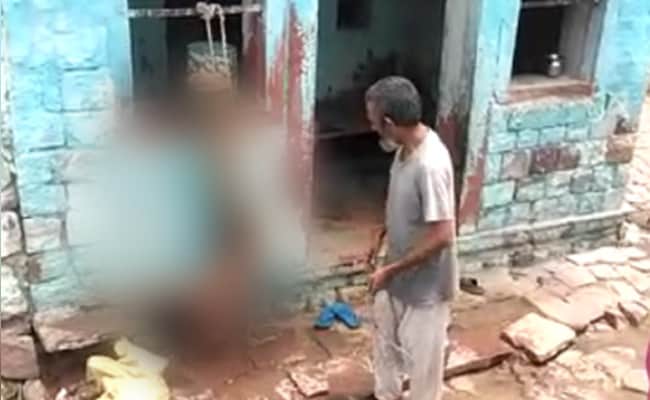 This is the second such disturbing incident, which has been caught on camera in UP.

A man was arrested in Uttar Pradesh's Agra on Saturday after he was seen assaulting his son, tied upside down with a rope, in front of fellow villagers.

A 52-second disturbing clip shows the young boy - tied upside down with a rope hanging at the window of a house - crying as the man thashes him with a rope and yells.

Several people are seen standing around as one man is heard saying: "He is a child, let him be". Among the spectators is a young boy, probably the child's sibling, who is shocked to see him being beaten mercilessly. .

"We have taken note of the video. The incident happened at around 6-7 PM yesterday (Saturday). The man was upset because of something that the child did," Ravi Kumar, a police officer from west Agra, told reporters.

"About three-four days back, he had a fight with his wife, who then went to her sister's home. He has three children.The one in video is his eldest son. We are questioning him... he hasn't admitted so far that he was drunk," he added. Agra is about 330 km from state capital Lucknow

This is the second such disturbing incident, which has been caught on camera in UP, leading to an arrest.

On Friday night, a security guard - Sanjay Mishra - was arrested after a video, widely shared on social media, triggered shock and anger.

The video shows the hospital guard beating an elderly homeless woman, in her 80s, relentlessly while she is screaming for help. The old woman had taken shelter outside the trauma centre of the Swaroop Rani Nehru Hospital in Prayagraj on Thursday.

As the video sparked outrage on social media, the woman was admitted to the same hospital for treatment. A First Information Report or FIR was filed against the guard soon after the incident. The hospital has blacklisted the private agency that hired the security guard and deployed him at the hospital.