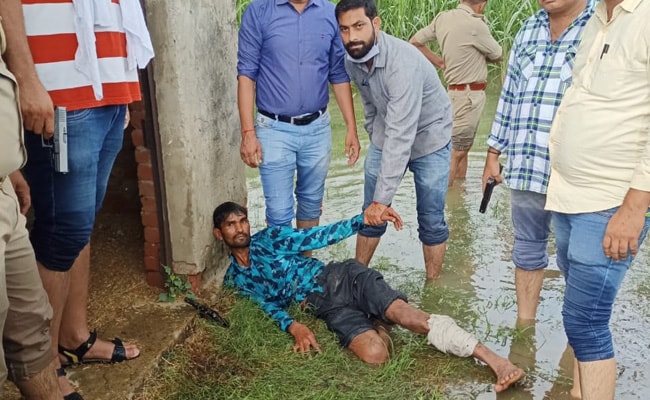 Dalpat was arrested earlier in the day, a week after he was accused of the rape in Hapur, UP.

A man accused of raping a 6-year-old girl in western Uttar Pradesh's Hapur was shot in the leg after he grabbed a cop's gun and tried to flee on Friday, the police have said. Dalpat was arrested earlier in the day more than week after the girl was kidnapped and raped.

"Dalpat was taken to the site of the crime for investigation where he snatched a policeman's pistol and tried to fire at them. In retaliatory firing, he was hit on the leg and has been admitted to a hospital," Hapur police chief Sanjeev Suman said.

The police had released a photo of Dalpat earlier this week, days after three sketches - based on the statements of the girl's parents and neighbours - were made public.

The police had announced a reward of Rs 50,000 or any information about the man. He tried to mislead the police by leaving some clothes and a "suicide note" next to a river yesterday, the police said. In the note, the man said he was taking his life because he did not want to die in a police encounter.

In recent years, the police in Uttar Pradesh have been accused of staging a number of encounters - a charge that drew national attention last month after the killing of gangster Vikas Dubey who was wanted in an ambush that left eight cops dead. The police have denied the encounter was faked.

According to the police, Dalpat had kidnapped the girl last Thursday from outside her home, less than 100 km from Delhi.

When her parents reported her missing, the police launched a search for her. She was found the next morning, unconscious and soaked in blood, behind bushes not far from her village.

A medical examination confirmed rape. The girl was rushed to a specialised hospital in Meerut and has been through at least one surgery. Doctors say she is stable but not out of danger.