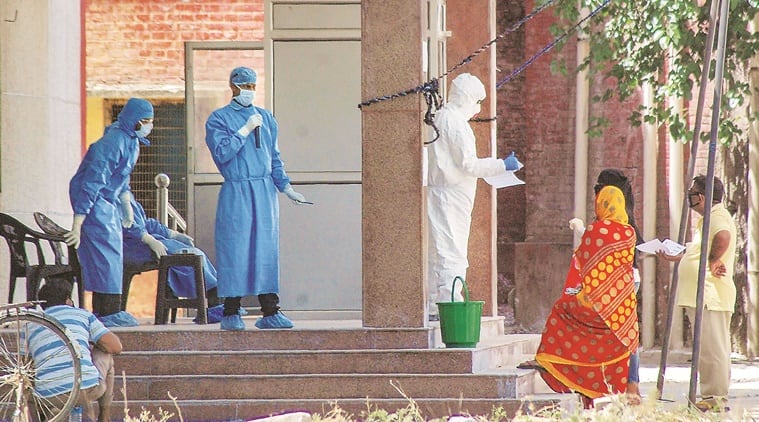 Health officials attend to people arriving for COVID-19 tests at a hospital in Kanpur on Tuesday. (PTI photo)

A 65-year-old Nepalese citizen, who tested positive for novel coronavirus, fled from a community health centre (CHC) in Baghpat’s Khekra area where he was undergoing treatment late Monday night, triggering large-scale search operation. He was caught from a brick kiln, two km from the hospital, nearly 12 hours later.

Police said that the 65-year-old was one of the 27 people who had attended the Delhi congregation of the Tablighi Jamaat in March and was staying at a mosque in Khekhra since their return on March 19. He was the only person in the group who had tested positive for COVID-19 and was admitted to the hospital’s special isolation ward on April 1, they added.

“His recovery was fine, but at the wee hours of Tuesday, heIndia escaped from the bathroom window of the hospital with the help of a bedsheet. The health staff immediately informed us and soon team were formed to search him,” RK Sharma, in-charge of Khekra police station, said.

Baghpat Superintendent of Police Pratap Gopendra Yadav said that 10 teams were formed to search the patient and WhatsApp messages along with the photo of the 65-year-old were sent to the people in the district to identify and trace him.

The message read: “He is a corona positive patient who is being treated at the CHC in Khekra. He has escaped from the hospital. Whoever he will meet will get infected by coronavirus. Therefore, it is important that he is found and undergoes treatment.”

Considering the gravity of the situation, Inspector General of Meerut Range, Praveen Kumar, had been camping in the district since early Tuesday morning to oversee the search operation.

“The patient was found hiding in a brick kiln pit, two km from the hospital. He has now been admitted to the district hospital in Meerut,” the SP said.

Meanwhile, the SP sought an explanation from the two constables, who were supposed to deployed at the hospital to keep a round-the-clock vigil on the patient.

“Initial inquiry has revealed that the two constables were sleeping in their vehicle when the patient escaped. An explanation on their laxity in duty has been sought from them,” the SP added.

District Magistrate Shakuntala Gautam said security arrangements in the hospital are being probed and added that CCTVs will be installed to monitor patients.