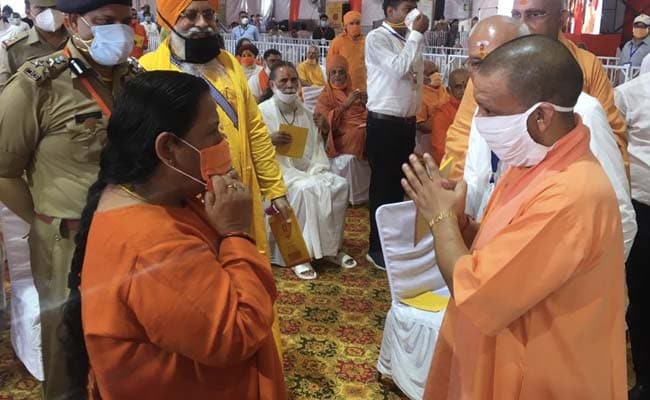 Senior BJP leader Uma Bharti, who on Monday said she would avoid the Ram Temple groundbreaking event in Ayodhya as a precaution against coronavirus, this morning said she would attend the grand event today.

"I am bound by dignity of Maryada Purshottam Lord Ram. I have been told by a senior Ram Janmabhoomi officer to remain present at the site of groundbreaking... So, I will attend the event," the 61-year-old veteran politician tweeted this morning in Hindi, shortly before she reached the Ram Janmaboomi site in Ayodhya.

The grand grounbreaking Ayodhya event today will revolve around the installation of a 40 kg silver brick as the foundation stone by Prime Minister Narendra Modi.

Besides PM Modi, 50 VIPs including Uttar Pradesh Chief Minister Yogi Adityanath and Mohan Bhagwat - the chief of the BJP's ideological mentor Rashtriya Swayamsevak Sangh (RSS) -- will attend the ceremony. Iqbal Ansari, a litigant in the temple-mosque dispute, was the first person to be invited.

On Monday, Uma Bharti had said she would visit the site of the temple only after the event was over. She said she felt worried about those attending the grand function after Home Minister Amit Shah and other top leaders contracted COVID-19.

"When I heard about Amit Shah and other BJP leaders testing positive I was worried about those attending the Ayodhya event, especially PM Modi," the former union minister tweeted, a day after the Union Home Minister said he had contracted the virus.

"I will leave Bhopal this evening and until I reach Ayodhya tomorrow evening, I may be exposed to the infection. In this situation, I will stay away from the place where PM Modi and others will be present. I will reach there only after everyone has left the spot," she had said.

Party veterans LK Advani - who led the Ram temple movement in the 1990s -- will attend the Ayodhya event today through video-conference amid the novel coronavirus pandemic. The Ram Janmabhoomi Teertha Kshetra Trust, tasked with building the temple, issued a last-minute invite to him and another prominent face of the movement, Murli Manohar Joshi.