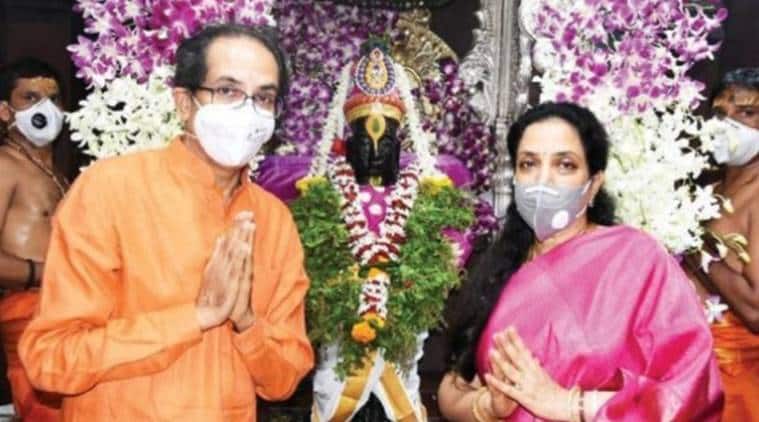 Uddhav Thackeray with his wife Rashmi at the Lord Vitthal temple in Pandharpur.

Chief Minister Uddhav Thackeray on Wednesday performed a ‘mahapooja’ at the Lord Vitthal temple in Pandharpur, on the occasion of Ashadhi Ekadashi.

“I prayed to Mauli. We want to see a miracle. Show us a miracle. Human beings have given up. We don’t have medicine. There is nothing. How to go on with life by covering the mouth with a strip,” the Chief Minister tweeted after performing the ‘mahapooja’ at 2 am, along with his wife Rashmi.

Speaking after the ‘mahapooja’, Thackeray said he prayed to Lord Vitthal to make the country coronavirus-free. ‘Warkari’ couple Vitthal Badhe and Anusuya Badhe, from Chinchpur-Pangul village in Pathardi taluka of Ahmednagar district, performed the mahapooja along with the Thackerays.

As the wari or palkhi processions were cancelled, ‘padukas’ of saint-poets Sant Dnyaneshwar and Tukaram were brought to Pandharpur from Dehu and Alandi.

The chief minister said he prayed for the welfare of farmers and fulfillment of dreams and aspirations of people in the state. He also handed over a cheque of Rs 5 crore to the Pandharpur Municipal Council and thanked the warkaris for cooperating with the government.

Thackeray said his government will take steps to develop Pandharpur. He said devotees should offer prayers at home on Ashadhi Ekadashi instead of thronging the town.

What If... Phone Was A Guy | Boy Formula | Chai Bisket