Trump May Share Stage With PM At "Howdy Modi" Event In Texas: Sources 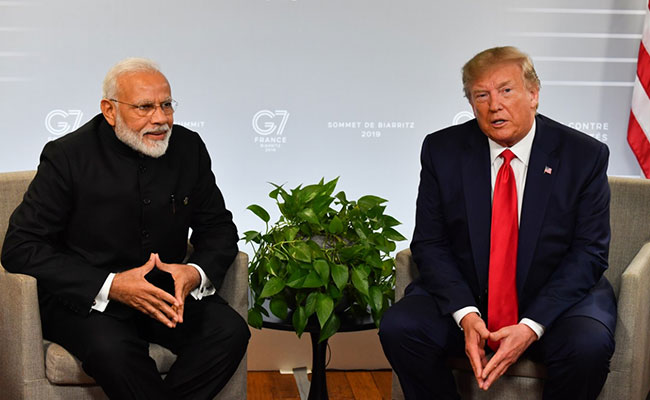 US President Donald Trump is "likely" to share a stage with Prime Minister Narendra Modi during his mega event supported by Indian Americans in Houston, Texas, on September 22. Sources said a final confirmation is still awaited. Reports said a much anticipated trade deal could be announced, ending months of bitterness over tariffs.

The US in June ended India's designation as a beneficiary nation under a key preferential trade programme that was designed to promote economic development by allowing duty-free entry for thousands of products from beneficiary countries.

If Mr Trump does attend the Texas event, it will send a strong signal of personal support to PM Modi at a time when several US lawmakers have expressed concerns about the restrictions in Jammu and Kashmir, which has gone on for over 40 days now.

The "Howdy Modi" event will see the participation of over 50,000 Indian Americans, who are also potential voters for Mr Trump, who fights a re-election next year.

Both countries are also working out a bilateral meeting of the two leaders during PM Modi's US visit, which could take place in Washington DC or New York City.

PM Modi will be in the US till September 28, primarily for the United Nations General Assembly (UNGA), where he will make a speech on the 27th - just ahead of Pakistan Prime Minister Imran Khan.

At the moment, Mr Khan is scheduled to speak shortly after PM Modi at the UNGA, where he is expected to focus mostly on Jammu and Kashmir following the withdrawal of special status and statehood by the centre.

PM Modi and Mr Trump last met at the G7 Summit in France on August 26, where the situation in Jammu and Kashmir and trade were high on the agenda.

But since July, Mr Trump has offered his assistance more than once.