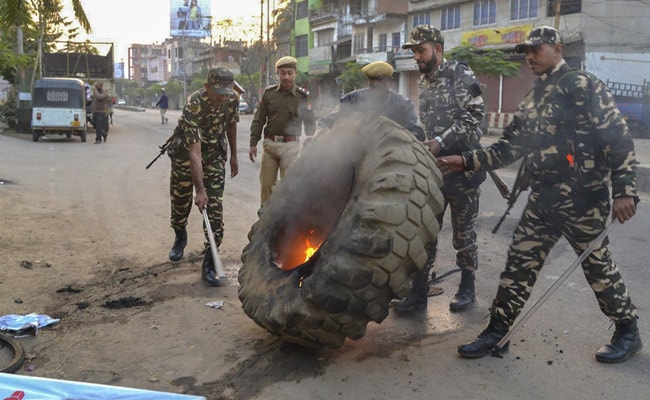 Protesters blocked roads across Assam with burning tyres on Tuesday.

The Biplab Deb government has decided to block mobile internet and SMS services across Tripura for 24 hours in view of violent protests against the controversial Citizenship Amendment Bill. The move came amid violence that erupted during an 11-hour shutdown called by influential student groups in the Northeast to protest the central government's move which, they allege, could rob the region of its ethnic identity.

The communications clampdown came into effect even as many demonstrators raised slogans against the centre in Agartala, demanding that the state be kept out of the purview of the controversial bill. "The services were stopped after state police found certain elements trying to incite violence through rumours circulated on social media," news agency ANI quoted a government official as saying.

Earlier, protesters set fire to a market with shops mostly owned by non-tribals in the northeast state's Dhalai district.

Life in Assam's Guwahati and many parts of the Northeast had come to a standstill earlier today, with the influential North East Students Organisation calling for a shutdown to protest the bill. Angry protesters burnt tyres on arterial roads, and according to a statement issued by the North East Frontier Railway, several trains had to be cancelled due to protesters blocking the tracks.

Massive protests were taken out in various parts of Assam, with protesters raising slogans and scuffling with security forces near the secretariat and assembly buildings. Agitators clashed with CISF personnel in Dibrugarh district, and three people suffered injuries in violence that erupted in Duliajan. The shutdown, which began early this morning, wound up at 5 in the evening.

The Citizenship Amendment Bill proposes to grant Indian citizenship to non-Muslim migrants who came to India from Bangladesh, Pakistan and Afghanistan before 2015. Many across the country, including imminent personalities, rights activists and opposition politicians, have demanded its immediate withdrawal in view of its "discriminatory" nature.

Although Union Home Minister Amit Shah has declared that much of the Northeast would be exempt from the proposed law, protesters remain convinced that it will result in a surge of illegal migrants into the region.

Former Assam Chief Minister Tarun Gogoi termed the passage of the Citizenship Amendment Bill as a "dangerous" development that will encourage people from neighbouring Bangladesh to flood the state. The Lok Sabha had passed the bill around midnight on Monday after nearly seven hours of heated discussions, with 311 voting for it and 80 against.

(With inputs from Agencies)